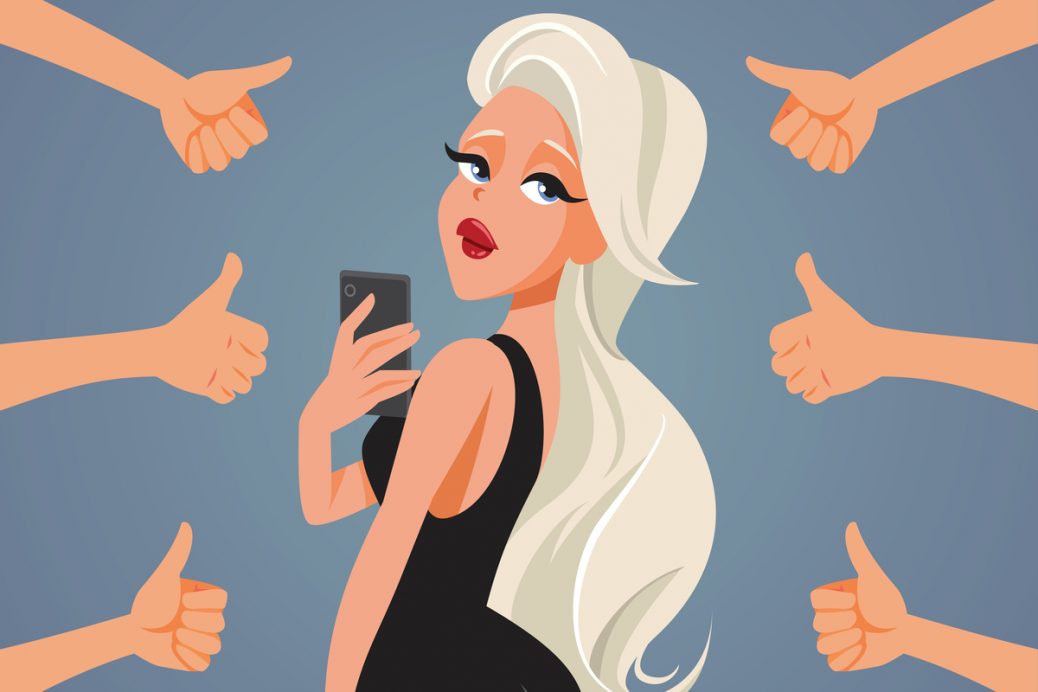 The commercial begins with movie director Spike Lee sitting on the steps of a Brooklyn brownstone with the words “Vaccinate the Block” written in white in the center of the screen.

It cuts to Lee, who is wearing a mask, walking past other masked residents sitting on stoops engaged in conversation.

“This is our block, our place, our people,” he says. Lee says nobody should be denied the COVID-19 vaccine because of their “dress, income, or skin color.”

He then ties in his partnership with Uber, the ride-hailing company, and says the company is “donating ten million rides to those who need it most,” so they can have access to the vaccine.

Celebrities have taken to social media and partnered with various companies to help the government sell the vaccine. It doesn’t matter which one: Pfizer, Moderna, Johnson & Johnson. They want you to know they know best, and the crowd of comedians, entertainers, and billionaires know the vaccines are all safe, and you should roll up your sleeve.

Many of the endorsements have been part of paid campaigns, as we have reported that some $50 million is being pumped into the Ad Council to sell the public into getting a COVID vaccination. (See our 1 December 2020 article, “AD COUNCIL APPROVES VACCINE PROPAGANDA CAMPAIGN.”)

Eva Longoria and Mark Cuban joined President Biden’s “We Can Do This: Live,” which encouraged young people to get the jab. John Legend teamed up with Walgreens for a “This is Our Shot,” another campaign for vaccine awareness.

The theory is that with each passing jab, the world gets a step closer to reaching herd immunity, which means, depending on what expert you believe... between 70 and 85 percent of the population is vaccinated.

Companies like Krispy Kreme have been offering free donuts, and states like New Jersey have been offering residents a beer if they get the jab. As we report in this Trends Journal, Ohio said it will enroll everyone who got the vaccine in lotteries that will award five residents $1 million and free state college tuition for students.

WebMD said this year may be the summer that “VIP” stands for “vaccinated, immunized person.”

The effectiveness of the vaccines has been praised by Dr. Anthony Fauci, anointed as America’s “top infectious disease expert.”

Those who mention that the “Operation Warped Speed” vaccines were rushed through the approval process and are not fully approved by the FDA are dismissed by the media and social network monopolies as conspiracy theorists while ignoring the fact that these drugs are being injected into millions under an emergency use authorization.

But that didn’t stop country singing legend Dolly Parton from posting a video on Twitter to call those who are apprehensive about taking the jab “cowards.”

“Don’t be such a chicken squat,” Dolly spewed. “Get out there and get your shot.”

The tradition of tapping a celebrity to persuade the public about the safety of vaccines can be dated back to at least 1956, when Elvis Presley, who was 21 at the time, posed for the cameras as he got his polio vaccination before an appearance on The Ed Sullivan Show.

Scientific American magazine reported that in the six months after Presley took the vax, the vaccination rate for U.S. teens jumped from 0.6 percent to 80 percent. The report said Presley was not single-handedly responsible for the tide of change but said the photo of him getting the jab “was far more powerful than any statistic because it too was personal, emotional, and vivid.”

Paid to Put Out

We have been reporting on celebrities and their attempt to influence public opinion on the jab. (See our 13 April article, “CELEBRITIES PITCH SO-CALLED “WELL HEALTH-SAFETY SEAL” and our 20 April article, “MICK JAGGER & BILL GATES: BLOOD BROTHERS.”)

Arnold Schwarzenegger quoted his “Terminator” character by saying, “Come with me if you want to live.”

Billy Crystal, the comedian, said, “I was glad to get this first step towards hugging my kids and my grandchildren again.” Fellow comedian Steve Martin posted, “Good news/Bad news. Good news: I just got vaccinated! Bad news: I got it because I’m 75. Ha!”

Willie Nelson, another legendary country singer, posted on Twitter: “Getting your COVID vaccine is Willie cool.”

Dwayne “The Rock” Johnson posted his “Round 2” moment. He captioned the photo with, “The more intel I come to understand the more work I realize we have in front of us.”

Kathy Griffin, the comedian, poked fun at those suspicious of the drug and captioned her photo with, “2nd Moderna shot! Dolly Parton put a 5G mind control chip in my head and I love it.”

Billboard magazine ran a cover with a picture of country musician Eric Church in his trademark shades getting a jab, with the headline, “HOT SHOT – ERIC CHURCH is on a crusade to save concerts: ‘You’ve got to get needles in arms.’”

The media has also generated new lockdown celebrities like Fauci and, until his unraveling, Gov. Andrew Cuomo. Both men have – at one time or another – been turned into sex symbols. Fauci now hobnobs with celebrities and recently held Zoom conferences with Ashton Kutcher, Katy Perry, and Kim Kardashian. When the meetings concluded, Fauci gushed and said he was impressed with their “level of sophistication.”

Tracy Epton, a psychologist at the University of Manchester in the U.K., told The New York Times that these celebrity endorsements could be important when overall trust in “government/official sources is quite low.”

A recent STAT News-Harris poll found that 21 percent of young adults from 18 to 24 said they will not get the vaccine, and another 34 percent said they would take the “wait and see” approach, CNBC reported. One of the major setbacks was when Johnson & Johnson was forced to temporarily halt the rollout of its vaccine due to reports of rare blood clotting.

New York Magazine has kept track of celebrities who’ve received at least one jab and their reactions. Sir Ian McKellen, the actor, said he felt “euphoric” after receiving the Pfizer shot in December. Martha Stewart shared a video of herself receiving the shot at New York’s Mount Sinai Downtown.

“Here’s to the advancement of science and a heartfelt thanks to those working on the vaccines,” she posted.

In Canada, celebrities joined a movement called “This is Our Shot,” which hopes to appeal to the country’s minority community. The celebrities include Michael Bublé and Ryan Reynolds.

Bublé posted on Twitter: “Canada! I got vaccinated because I want to protect myself, my family & all the vulnerable folks out there. Please join the #ThisIsOurShotCA challenge and tag your friends & family to get vaccinated.”

Celebrities in India also took to social media to encourage their followers to take the jab. Sonu Sood, a Bollywood actor who has been praised for his philanthropic work during the outbreak, has heard calls to run for prime minister.

The Chinese Communist Party is famous for using celebrities to promote its message, and any sign of disloyalty means career suicide. Celebrities in Germany were recently forced to apologize for videos mocking COVID-19 lockdowns.

Celebrities, politicians, and musicians intermingled during the Global Citizen’s “Vax Live: The Concert to Reunite the World,” which aired last Saturday and aimed to tackle vaccine inequity and hesitancy.

NPR reported that the event was pre-taped at Inglewood, CA’s SoFi Stadium. The report said there were 27,000 fully-vaccinated health care workers in the audience who “painted a picture of what a post-pandemic world could look like if all were immunized against the coronavirus.”

One of the highlights reportedly included Jennifer Lopez who appeared on stage with her mother.

“We’ve been away from our loved ones for too long, but we’re back,” Lopez said. “While it’s getting better for us, there are people all over the world—especially in Africa, India, and the Latin world—who still need our help and our vaccines.”

Another highlight included Prince Harry, whose grandfather was quoted for saying he’d like to die and come back as a deadly virus, who “co-chaired” the event with his wife, Megan Markle. He said the world “cannot rest or truly recover until there is fair distribution to every corner of the world.”

Rare is the celebrity who is willing to stand up to government mandates. In September, we reported that Van Morrison, the famed singer behind “Brown Eyed Girl,” wrote a song accusing the British government of enslaving the population with its strict coronavirus mandates.

He called out the U.K. government as “fascist bullies disturbing our peace.” The BBC reported Morrison wrote a new song that includes the lyrics,

“No more taking of our freedom

And our God-given rights

Pretending it’s for our safety

When it’s really to enslave.”

Calling out the cast of “celebrities telling us what we’re supposed to feel,” Morrison said they are being used as mouthpieces for the government to sell the people what they are peddling. He said it is becoming rare nowadays to find an artist who is not afraid to speak out against what is being widely accepted as groupthink.

Clapton wrote to music mogul Robin Monotti Graziadei, saying, “I took the first jab of AZ and straight away had severe reactions which lasted ten days… My hands and feet were either frozen, numb or burning, and pretty much useless for two weeks, I feared I would never play again…”

“I should never have gone near the needle,” Clapton continued. “But the propaganda said the vaccine was safe for everyone.”

“I’ve been a rebel all my life, against tyranny and arrogant authority, which is what we have now,” he added.

Despite Clapton condemning the British government earlier this year, and collaborating with fellow anti-lockdown musician Van Morrison on the anti-lockdown song “Stand and Deliver,” he went ahead and got the COVID Jab.

TREND FORECAST: The COVID War has shown that there are only a handful of true celebrities who don’t need to worry about their future employment and do not suck up to their corporate bosses. But for the others, the embrace of Big Government policies could be as beneficial for their careers as securing a big-time agent. That will not change any time soon.

As we have forecast, following the COVID War, there will be a Renaissance. Art will be among the most powerful mediums to spread the message of Liberty, Love, Joy, and Beauty in an era of complete corporate/government control of the mainstream media.