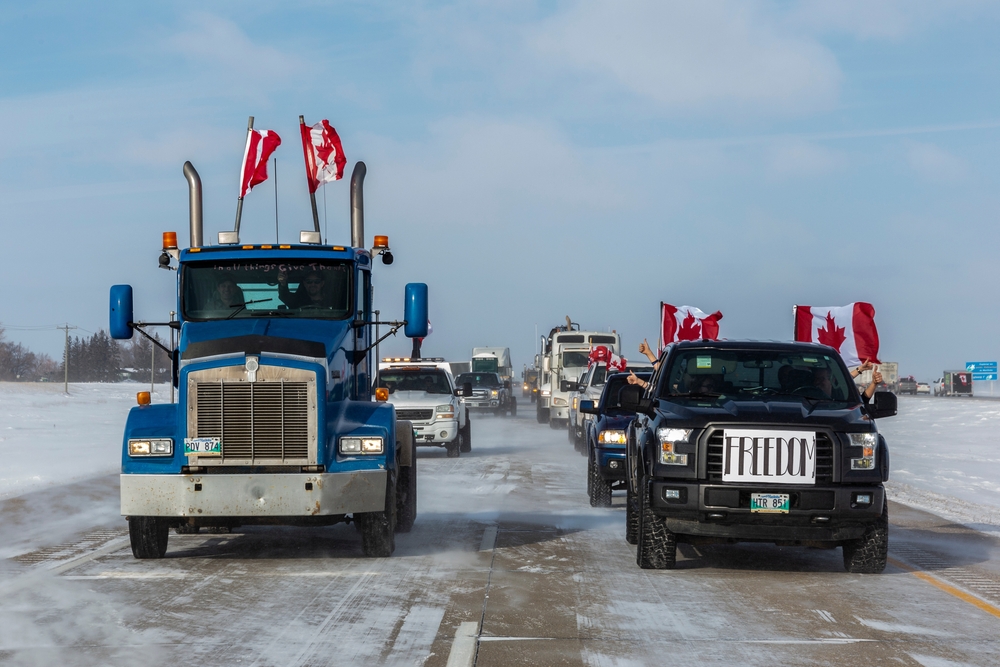 For lies and misinformation, tune into the mainstream media’s coverage of the ongoing massive Canadian Truckers protest at the nation’s capital, Ottawa.

The Presstitutes sell fear and hatred while ignoring the intent of the trucker’s “Freedom Convoy”: Brave human beings standing up against being forced by politicians to take the Operation Warp Speed gene therapy inoculation for cross-border trucking.

Here are some lies from Al Jazeera which labels the trucker’s movement as “The so-called Freedom Convoy.”

It is not a ‘so-called’ it is called the Freedom Convoy.

Doubling down on their lie campaign, and playing down the significance of the convoy, Al Jazeera opens the article with the bullshit line that “Hundreds of truckers have driven their rigs into the Canadian capital Ottawa to protest against Prime Minister Justin Trudeau’s COVID-19 mandates required to cross the United States border.”

NO, NOT HUNDREDS...TENS OF THOUSANDS! The last report was over 50,000 trucks.

Back in the State’s, yesterday, Google up “Canadian Truckers,” and here is the headline that jumps out on the Jeff Bezos owned Washington Post: “Opinion | Canada must confront the toxic 'Freedom Convoy' head-on.”

No, the ‘Freedom Convoy’ is not “toxic.” The arrogant Pressitute—the media whore who gets paid to put out by the corporate pimp and government whore master—is “toxic.”

Doubling down on their hatred for Freedom, another Bezos Washington Post rag’s headline googled up yesterday was: “‘Illegal' acts during Canada's Freedom Convoy trucker protests investigated by police.”

Again, ignoring the size, depth and width of the Freedom Convoy, dismissing the true numbers of people taking to the streets in sub-zero weather, this was the Associated Press(titutes) headline yesterday: “Police in Canada investigate monument desecration in wake of trucker protest against COVID rules.”

Remember there are at least 50,000 truckers and tens of thousands of Freedom rally demonstrators. Yet, this is the opening sentence: “Police in Canada’s capital said Sunday they are investigating possible criminal charges after anti-vaccine protesters urinated on the National War Memorial... .”

One person pissed on some statue? That’s news? That is reflective of the Freedom Convoy?

Therefore, as we continue to detail, totally absent in the low-life mainstream media coverage are why people are fighting for their human rights. Instead, the Presstitutes are spreading lies, fear and hatred rather than a balanced approach.

This is not journalism, it is pure, selling their agenda and government propaganda.

As for U.S. coverage of this massive event, not one line of coverage in yesterday’s The New York Times or The Wall Street Journal.

And for the Cartoon Network (CNN), ignoring the megatrend Freedom Convoy, their headline was that the coward of a clown playing Prime Minister of Canada—the silver spoon little Daddy’s Boy born on third base and thought he hit a home run—who went into “isolation” as the truckers were heading into Ottawa was: “Canadian Prime Minister Justin Trudeau tests positive for Covid-19.”

Yes, the triple jabbed PM got COVID according to the reports... which again confirms the 96 percent efficacy lie that Pfizer sold to the public some two years ago, and that two jabs would be all that was needed to beat the virus. But these facts are completely ignored by the Cartoon News Network.

Yesterday, the top story on Yahoo was (who gives a shit) : “Hoda Kotb and Joel Schiffman Break Up After 8 Years Together.”

Reports from the city said that the trucks and protests have resulted in a virtual standstill for two-straight days and those taking part in the demonstration said there is no firm date on when the protest will end. The Daily Mail reported that one protester said they will stay in the capital as long as it takes for the government to back down from the new policy.

"Right now, yeah, it's really cold, but we hang in there, the days are going to get longer and we take this block party and put it into overdrive,' BJ Dichter, one of the organizers of the Freedom Convoy, said at a press conference, according to the paper. "We're in this one for the long haul. We don't have a time limit."

The protest was organized by Canada Unity, a group that has opposed Ottawa’s COVID-19 mandates. The convoy that entered Ottawa on Saturday is a direct response to Prime Minister Justin Trudeau’s government’s decision to force all truckers who cross the border with the U.S. to be fully vaccinated to work.

History in the Making 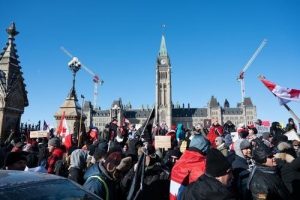 The protest has attracted international attention. Gerald Celente, the publisher of The Trends Journal, called the truck convoy the opening salvo in the West’s freedom-from-vaccine movement. He said the truckers cannot back down if they want to achieve their goals. He said they must tell the media that this is a PEACEFUL protest, and that any violence "will be that of the Trudeau Mob…agents provocateurs."

Elon Musk, the Tesla billionaire, also threw his support behind the truckers when he posted on Twitter Wednesday, “Canadian truckers rule.” Musk told Time last month that he and his children were vaccinated from the virus, but told the news outlet that he was opposed to forced vaccinations.

“We’ve got to watch out for the illusion of freedom in America,” he said.

Donald Trump, the former president, praised the protest during a Texas rally on Saturday and said these truck drivers are "resisting bravely these lawless mandates."

The Canadian government has put in place the tried-and-true response to the well-organized protest by attempting to portray the participants as dangerous elements from the right-wing fringe.

Ottawa police announced on Twitter that they were on high alert and were aware “of inappropriate and threatening language on social media related to this event.”

There were no incidents of violence or injuries on the first night, but the Ottawa Citizen reported that many of the streets in the downtown area were rendered impassable.

Ottawa police also said on Twitter that they had "several criminal investigations" underway and accused one protester of desecrating a National War Memorial and others for allegedly intimidating non-protesters.

In hiding, and refusing to meet with the protesters, Trudeau, as have the media pawns, denounced them, saying that  "Freedom of expression, assembly and association are cornerstones of democracy, but Nazi symbolism, racist imagery and desecration of war memorials are not."

There were dozens of trucks in front of the Parliament buildings that blasted their horns on Saturday morning. Thousands of truckers were expected to attend the demonstration.

Trudeau and his family were moved from Rideau Cottage to an undisclosed location on Saturday during the protest in Ottawa, which was about 2.5 miles from his home, UPI reported. Trudeau was moved because of the threat that some protesters could arrive at politicians’ homes.

The newspaper reported that Trudeau’s office said he was in the capital region and is continuing to “isolate.” (The prime minister, who is fully vaccinated and boosted, announced last week that he would self-isolate after he was exposed to someone with the virus.  Now he claims, as noted above, he has the virus.)

Trudeau brushed off the protests as a campaign by fringe activists that do not represent the feelings of the average Canadian. The Canadian Trucking Alliance, which represents about 50,000 carriers, said it is opposed to the protest, according to Reuters.

TREND FORECAST: Confirming our forecast of the power of the Canadian Trucker’s Freedom Convoy, a majority of Canadians now say they want COVID restrictions lifted, according to an Angus Reid poll. This a sharp increase from when the same question was asked in early January.

Should other nation’s truckers launch Freedom Convoys of this magnitude, people power will force politicians to end many COVID War restrictions. There are reports convoys will be launched in the U.S. and have already begun in some European nations and in Australia.

We most recently saw this truth demonstrated in November when Indian Prime Minister Narendra Modi on Friday said lawmakers would repeal the agricultural laws that farmers in the country feared would leave them in financial ruin. (See “MODI LOSES, FARMERS WIN. A MEGA-TREND BEYOND INDIA.”)

And as we noted in the Trends Journal last week, Serbia's government reversed the controversial Rio Tinto lithium mine that was planned for the western part of the country after weeks of massive protests claiming that the mine would lead to environmental ruin for neighboring towns.

As we have been reporting, week after week, month after month thousands of demonstrators took to the streets blocking main roads and bridges used to access the mine site near Loznica.

These protesters, as with the current Freedom Convoy in Canada, also faced an intimidation campaign by authorities and police brutality. “We are not afraid of Rio Tinto,” Ana Brnabić, the Serbian prime minister, said, according to the report. “We are here for our people and our country. They can do whatever they think they should do. This is the final decision of the government of the Republic of Serbia.

Immediately following one of the biggest anti-nuclear protests in American history, back in 1982, when nearly a million protesters gathered in New York City’s Central Park, Defense Secretary Caspar W. Weinberger said how useless and ineffective the event was in changing Washington’s policy.

"The fact that a very large number of people turn out for a particular event is certainly something that people notice. But I don't think that anybody rushes back and says, 'We have to change our policy' . . . or something because there's been a rally."