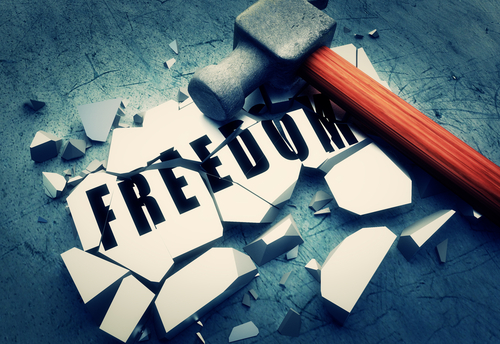 The Canadian Civil Liberties Association announced that it was taking Prime Minister Justin Trudeau and his government to court over their decision to invoke emergency powers to quell the anti-vaccine-mandate protest that broke out in Ottawa that has carried on for about three weeks.

The association called Trudeau’s emergency orders “an extreme law that has never been used.” The group said the declaration is “unprecedented” and “seriously infringes the Charter rights of Canadians.”

“Through all the peaceful and disruptive protests in Canada's history—some involving unlawful acts and protracted standoffs with police—never before has a government declared a national emergency under the Emergencies Act, and with that given itself the enormous powers to bypass the ordinary, accountable democratic process,” a statement read.

The CCLA said the rarely used act can only be used when a situation emerges that “seriously threatens the ability of the Government of Canada to preserve the sovereignty, security and territorial integrity of Canada.”

The Trends Journal has reported on the protest in Ottawa over the vaccine mandate for truckers to travel across the border and into the U.S. (See “CANADIAN TRUCKERS FREEDOM CONVOY: MEGATREND DEFAMED BY MAINSTREAM MEDIA LIES,” “TRUDEAU STILL IN HIDING, INVOKES RARELY USED EMERGENCY ACT” and “CANADIAN TRUCKERS PROTEST: A MEGA TREND FOR FREEDOM.”)

The protest has attracted international attention. Gerald Celente called the truck convoy the opening salvo in the West’s freedom-from-vaccine movement.

He said the truckers cannot back down if they want to achieve their goals. He said they must tell the media that this is a PEACEFUL protest, and that any violence "will be that of the Trudeau Mob…agents provocateurs."

Daddy’s boy Trudeau followed in his father’s footsteps by declaring the emergency. Pierre Trudeau, the former prime minister, invoked the same emergency order during a terrorism crisis in Quebec. (His father’s order—which was known at the time as the War Measures Act—came after the Quebec Liberation Front set off 200 bombs and killed the deputy prime minister of Quebec. Daddy Trudeau was accused of exaggerating the threat in order to pass the orders.)

“Protests aren’t emergencies, and Western leaders had better get used to handling civil disobedience firmly without traducing civil liberties.” The paper accused the younger Trudeau of deputizing financial institutions “without due process or liability.”

Ryan Alford, a professor of law at Lakehead University in Ontario, wrote in Newsweek that Trudeau failed to prove that the trucker protest warranted the order. He wrote that the Canadian government claimed that the Freedom Covoy’s activities are “directed toward or in support” of terrorism, which he said is bunk.

“It's an astonishing claim for those who have been following the protests both in Canada's capital and at border crossings closely,” he wrote. “There is not a single violent incident that could possibly support a legally sufficient argument that the protests have been in support of or connected with terrorism.”

The Journal reported that when police moved to break up the blockades at borders, the protesters dispersed peacefully, including one that ended with police and protesters shaking hands.

The paper pointed out that gas pipelines in Canada are commonly protested by green or aboriginal activists—including one on Thursday that included men wielding axes. But not a peep from Trudeau.

There were more than 100 arrests on Friday and 47 more on Saturday. Police said some were sprayed with “a chemical irritant in an effort to stop the assaultive behavior and for officer safety.”

Video emerged on social media that purportedly showed officers holding a long-range acoustic device that can cause permanent hearing loss.

Police in Ottawa’s downtown moved in on Sunday and broke up the last remaining protesters. Trudeau’s bullying gang had a message for the few remaining demonstrators: we’ll find you.

“If you are involved in this protest, we will actively look to identify you and follow up with financial sanctions and criminal charges,” Ottawa police tweeted Sunday, according to The National Post. The paper pointed out that Steve Bell, the interim police chief, said on Saturday that the investigation into the protest will last months.

“You have my commitment that that investigation will continue and we will hold people accountable for taking our streets over,” Bell said.

Rep. Yvette Herrell, R-N.M., said Saturday that she intends on introducing a bill that would grant temporary asylum to these protesters "just as we provide asylum for political prisoners."

"We should do the same for truckers who have been subjected to violence, had their property confiscated, and their bank accounts frozen by a government that is quickly becoming the embarrassment of the free world,” she announced on Twitter.

Canada’s left-leaning New Democratic Party gave strong support to extend the Act while the Conservative Party and Bloc Quebecois opposed, arguing that the emergency powers were a threat to civil liberties.

As we have noted, the imposition of the Emergency Act to stop future demonstrations is one of the most aggressive moves taken by Western governments to repel citizens who protest against being forced to be inoculated with the Operation Warp Speed jab and the strict mandates imposed upon them to fight the COVID War.

TRENDSPOST: Prime Minister Justin Trudeau received an open letter from clergy in the country admonishing the leader for missing an opportunity to speak with the truckers who “lawfully and peaceably” called on the restoration of their constitutional rights.

“However, in response to their singing, praying, dancing, candy floss, bouncy castles, speeches about the constitution and outpourings of patriotic love for the country, your government has not only refused to meet with these citizens to hear their concerns, you have insulted, denigrated and lied about them, further dividing a hurting and broken nation,” the letter read.

The letter—which was signed by 29 clergymen—told Trudeau that the elected government “does not grant people the right to their bodily integrity, the right to work or earn a living, the right to decide for their children or to be with their families or dying loved ones, the right to gather to worship and obey God, the right to travel in their own land or enter and leave. Civil government exists to protect these pre-political and fundamental freedoms, not bestow and remove them as if it can function in the place of God.”

They called his decision to invoke the act “tyrannical” and said they are “deeply concerned that you do not appreciate the significance of God’s wrath upon a rebellious and lawless nation.”

Trudeau, a member of the Liberal Party, has been fixated on tying the protesters to right-wing groups. He joined the Canadian House of Commons on Wednesday and an exchange got testy when he accused the Conservative Party of standing with “people who wave swastikas.”

Melissa Lantsman, who became the first Jewish woman to be elected as a Conservative in parliament last year, read Trudeau’s characterization of the Freedom Convoy as “very often misogynistic, racist, women-haters, science-deniers, the fringe.”

She asked, “When did the prime minister lose his way?”

"Mr. Speaker, I've never seen such shameful and dishonorable remarks coming from this prime minister. My great-grandfather flew over 30 missions over Nazi Germany. My great-great-uncle's body lies at the bottom of the English Channel. There are members of this Conservative caucus who are the descendants of victims of the Holocaust. For the prime minister to accuse any colleague in this House of standing with a swastika is shameful. I'm giving the prime minister an opportunity. I'm calling on him to unreservedly apologize for this shameful remark."

Trudeau was given three chances to apologize. He did not.