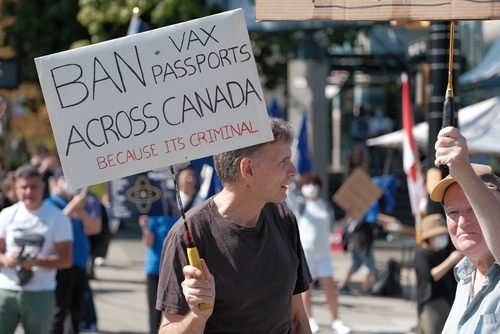 Merry Christmas, Happy New Year! It’s not the season to be jolly. The latest round of COVID-19 restrictions in Nova Scotia are coming at a “Worse time for the restaurant industry.” Gordan Stewart, the president of the Restaurant Association of Nova Scotia, said the new capacity and seating restrictions put in place to stop the spread of COVID-19 could not have come at a worse time for the industry.

“All the meetings, receptions, events are now canceled and it’s worth millions of dollars,” he told Halifax’s City News. He continued, “It’s the kind of thing where if there is no pre planning for it, then there's obviously going to be a lot more damage around it. People don't think of things like consumer competence, which is totally damaged.”

He told the outlet that many restaurants in the city did not make ends meet last year, and these new restrictions put them behind the eight ball going into 2022.

The Trends Journal reported on the lockdowns that upended the economy there. (See: “NOVA SCOTIA: MINOR # OF COVID DEATHS, MAJOR LOCKDOWN,” and “HALIFAX, NOVA SCOTIA: 22 FINED $22K.”) The new restrictions also limit 20 people per table (indeed, not 19, 22, or 13 per table... since politicians and bureau-craps make up these numbers which lack scientific data).

“What would have been better as if the government had some pre-consultation with us that we could have advised them on some of the outcomes and we might have been able to mitigate some of those outcomes. Some of them are easy to modify but some are not and I'm sure they don't understand the full implications of all the things that are going to happen because of this position,” Stewart said.

TRENDPOST: Nova Scotia on Saturday reported 426 new COVID-19 cases, which is a new record for one-day increases, and the ninth day in a row that the province of nearly one million recorded over 100 cases. Absent the Presstitutes reporting is that no one has died of the Omicron virus in Canada, and as we had detailed, the symptoms are mild.

And, of those hospitalized, how many were obese, overweight, suffering from respiratory ailments or pre-existing comorbidities?

Also absent the Presstitute reporting is the fact that of the 30,000 Canadians that allegedly died of the virus over the last 20 months (out of a country for 38 million people), 24,500 were aged 70 and above, while of those, 18,200, or over half of all alleged COVID deaths, were people over 80 years of age.

The unhealthy, overweight Ontario Premier Doug Ford announced Friday that there is little that his government can do to completely stop the spread of the highly transmissible Omicron variant, but what they can do is slow the pace of infections by putting in place new capacity restrictions at restaurants and retail shops.

“The experts have been very clear: nothing will stop the spread of Omicron. It’s just too transmissible. What we can do, and what we're doing, he's slowing it as much as possible to allow more time for shots to get into arms.”

The government announced a 50 percent capacity limit in indoor settings ranging from restaurants and bars to strip clubs. Tables are not allowed to have more than 10 occupants and bars and strip clubs will be forced to close up shop at 11 p.m., according to Global News. The report said alcohol sales will also be restricted after 10 p.m. Ford admitted that he is not sure what will happen to schools as students are supposed to return from winter break.

The report said that there were 3,124 new cases reported on Friday in the province of 14.57 million. There were 382 people hospitalized as of early Sunday, including 154 in the ICU. Ford said out of 1,000 confirmed Omicron cases, two have been hospitalized, the report said.

The new mandate took effect at 12:01 a.m. ET on Sunday. Under the mandate, outdoor gatherings cannot have more than 25 people, which is reduced from 100.

“Omicron will not take a holiday,” Kieran Moore, the chief medical officer of health, said.

TRENDPOST: Doug Ford, the premier from Ontario, told residents there that he feels their pain and takes no pleasure in putting these new mandates in place.

“Over the last 20 months, you've been asked to sacrifice so much. We've all dug so deep. And now we need to dig a little deeper. We'll get through this,” he assured them.

Ford and his “health officials” haven’t missed a paycheck, nor will they.

Politicians who pretend that the COVID-19 pandemic has been a shared misery are just lying. It has not. By and large, the rich have gotten richer, and the poor, poorer.