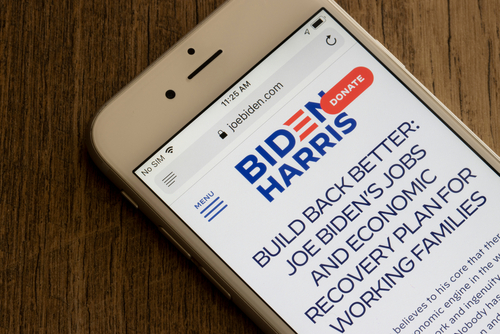 President Joe Biden has made it clear that Americans should know that the economic hardships that they face can be blamed on Russian President Vladimir Putin and not the useless COVID-19 lockdowns, trillions in stimulus funding, and massive sanctions leveled against Moscow... all which have spiked inflation and driven down the economy.

Biden said Wednesday that Americans have been willing to sacrifice after the Russian invasion and “chose to stand with the people of Ukraine.”

"So for all those Republicans in Congress criticizing me today for high gas prices in America, are you now saying we were wrong to support Ukraine? Are you saying we were wrong to stand up to Putin? Are you saying that we would rather have lower gas prices in America and Putin’s iron fist in Europe? I don’t believe that," he said.

Biden has long blamed the Russian president for causing the economic hardships in the country and said “Putin’s price hike” is taking its toll on Americans. Biden used a recent speech in Los Angeles to call energy price increases “Putin’s tax.”

Last Wednesday Fed Head Jay Powell appeared before the Senate Banking Committee and noted how inflation was popping even before the 24 February Russian invasion of Ukraine.

A “bit” late, for nearly two years Powell was saying inflation was “temporary, then “transitory, while we warned of skyrocketing inflation as a result of the zero interest rate policy and the trillions of cheap money dollars pumped into the economy to artificially prop it up during the height of the COVID War.

TRENDPOST: Readers of the Trends Journal know that we have rejected claims that inflation was “temporary” or "transitory" for months. (See “INFLATION RISING. NOT 'TEMPORARY' OR 'TRANSITORY.”) As long ago as 4 August 2020, we warned in our “Global Economic Trends” section that supply-chain disruptions would lead to inflation and that those disruptions would make inflation a long-term problem (“Consumer Prices Rise in July,” 18 Aug 2021).

Powell was asked by Sen. Bill Hagerty, R-Tenn., about inflationary pressures. Hagerty said inflation was at 1.4 percent in January 2021 and by December 2021, it jumped to 7 percent. Powell acknowledged that inflation was high before the war.

“I’m glad to hear you say that,” Hagerty responded. “The Biden administration seems to be intent on deflecting blame and as recently as just this past Sunday spread the misinformation that Putin’s invasion of Ukraine is the ‘biggest single driver of inflation.’ I’m glad you agree with me that that is not the truth.”

Putin also chimed in on Biden’s claim during a notable virtual meeting with fellow BRICS leaders last week. Putin laid blame on the irresponsible actions by G7 countries, and pointed out that the jump in prices “did not happen yesterday.”

Putin called those blaming him on the West's economic woes as ignorant to the facts. Putin, who did not mention the U.S. by name, said Western leaders were using Russia as a “life buoy” to avoid taking responsibility for their economic hardships.

Biden Calls for the Suspension of the Federal Gas Tax

President Joe Biden last week appealed to members of Congress to suspend the federal gas tax for about three months, which is about 18 cents a gallon that goes to the federal Highway Trust Fund.

Jay Zagorsky, senior lecturer in markets, public policy and law at Boston University, told MoneyWise that the typical American could plan to save just slightly less than $6 a month.

“In a time when inflation is over 8 percent, an extra $6 will not make much difference,” he said.

WSWS.org reported that the president also called on states to suspend their gas taxes because the country needs to come together during this “time of war, global peril, Ukraine.”

WSWS.org took issue with Biden saying the country is experiencing a war, pointing out as we have, noted... America is at war with Russia:

“Who declared this war? Who brought the United States into it? This statement blows apart the fiction that the U.S. and NATO are not at war with Russia. And the assertion contradicts the claim that the U.S. concern in Ukraine is to ‘defend democracy and freedom.’ When were the American people ever consulted about this war? The very decision to intervene was taken on democratically and behind closed doors, as the result of a protracted imperialist build up against Russia.”

Biden has suggested that the criticism that he faces is just the politics of the moment.

“But the simple truth is gas prices are up almost $2 a gallon because of Vladimir Putin’s ruthless attack on Ukraine, and we wouldn’t let him get away with it,” Biden said. “And we’re doing everything we can to reduce this pain at the pump now."

TREND FORECAST: The “simple truth” is that simpletons are running the government. Go back to March when Washington announced a ban on Russian oil imports, joining Canada and the United Kingdom. Oil prices in the U.S. hit their highest levels since 2008. Prices reached $130 per barrel last Sunday, which we pointed out. (See “WAR IN UKRAINE ECONOMIC OVERVIEW.”)

And on 11 March Biden declared, “Democrats didn’t cause this problem. Vladimir Putin did,” Biden said of the Russian president. “Putin’s gas tax has pushed prices higher.”

Yet, there was little or no denunciation for this moronic statement from the Presstitute media that gas prices were rising before the Ukraine War, and Biden, by his own admission, had made a bad situation worse.

The national average price of gasoline surpassed $5 a gallon for the first time ever in June, and some economists have warned these prices could hit $6 sometime during the summer months.

Again, as we continue to note, the general public is only getting a one-sided view of the sanctions and mandates imposed against Russia, which we forecast will do nothing to alter Moscow’s military posture, but will cause great hardship for the people of the world.

And, as to how will Russia fight against the sanctions being imposed upon it and the scores of businesses and financial institutions leaving the nation? Russia has bolstered itself over a long period of time—even prior to the Ukraine War—in preparation for the assault by creating as much of a self-sufficient economy as possible, in line with our Top 2022 Trend of self-sufficiency.

Also, while President Biden said back in mid-March that “As a result of these unprecedented sanctions, the ruble almost is immediately reduced to rubble,” the ruble is trading at a seven year high.

TREND FORECAST: Again, with not a mention of peace or the reality that Ukraine will not defeat Russia, Biden had ramped up the killing machine by stating that “We’re going to make sure Ukraine has the weapons to defend themselves against an invading Russian force," he said, vowing to defend "every inch of NATO territory."

Yes, after being unable to win a single war it has started since the end of World War II, Biden’s war mongering is cheered by Congress and applauded by the mainstream media.

And as they have a long history of doing, the mass of Americans swallow Presidential and “official”  bullshit, just as they have marched off to every war the U.S. has launched since the end of WWII... including getting jabbed to fight the COVID War.