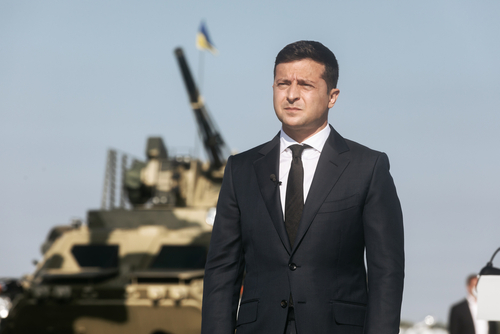 Luiz Inácio Lula da Silva, the former Brazilian president who is in the middle of another run for the presidency, made waves in an interview published Wednesday when he said Ukrainian President Volodymyr Zelensky shares blame for the Russian invasion earlier this year.

Characterized as a deeply left-leaning liberal, Lula, speaking to Time magazine, made fun of Zelensky in terms of his role as a nation’s leader where rather than being dignified and factual he said, “I see the president of Ukraine, speaking on television, being applauded, getting a standing ovation by all the parliamentarians. This guy is as responsible as [Russian President Vladimir] Putin for the war.”

Lula’s comments, as have Putin’s Victory Parade comments, elicited negligible Western news coverage, since it has become almost a sacrilege in the West to do anything but praise the current president of Ukraine.

Politicians from across the world trip over themselves to get an opportunity to be seen with Zelensky in Kyiv.

The former Brazilian president, who was convicted following an investigation into a bribery scandal to later have the charges annulled, told the magazine that Zelensky should have ignored Western officials and acknowledged Russia's security concerns prior to the conflict.

“We should be having a serious conversation. OK, you were a nice comedian. But let us not make war for you to show up on TV,” Lula said. He said Zelensky should have resisted talking about Ukraine joining NATO.

Lula’s interview with the magazine was wide-ranging and he pointed to diplomatic shortcomings from the United States that he said had the political clout to avoid the war and not “incite it.”

“Biden could have taken a plane to Moscow to talk to Putin. This is the kind of attitude you expect from a leader,” he said.

He continued, “In the same way the Americans persuaded the Russians not to put missiles in Cuba in 1961, Biden could have said, ‘We’re going to speak a bit more. We don't want Ukraine in NATO, full stop.’ That's not a concession.”

Lula brought up Zelensky’s desire to be on camera and said it seems as though “he's part of the spectacle.”

TRENDPOST: The Trends Journal has extensively reported on the U.S.'s position vis-á-vis the Ukrainian conflict and has published several articles about Secretary of State Antony Blinken refusing to make any concessions when it came to Russia's security concerns about NATO encroachment. (See “WASHINGTON AND NATO: NO CONCESSIONS TO RUSSIA.”)

Russian President Putin raised concerns about weapons systems being placed near Russia's borders and called the move “red lines.” Putin sees the possibility of Ukraine becoming a member of NATO as a security threat for Russia. NATO says it will not let Moscow dictate who gets to join and who does not.

Since the war started, the U.S. has been a total cheerleader for Ukraine, when it is not providing weaponry. We reported last week that House Speaker Nancy Pelosi and her “Delegation of Doom,” visited Zelensky in Kyiv and promised more weapons after lavishing him with the customary praise.

Rep. Adam Schiff, who was part of the delegation, tweeted, he was in “awe of the courage of President Zelenskyy and the Ukrainian people. In the face of extreme Russian brutality, Zelenskyy has inspired his people, and freedom-loving individuals across the world.”

Rep. Jason Crow, D-Colo., was part of the delegation that genuflected at the Altar of Zelensky, and told reporters afterwards that there were three areas of focus: "weapons, weapons, and weapons." He also posted a photo on his Twitter page promising Kyiv that the U.S. “is in this to win in and we will stand with Ukraine until victory is won.”

TRENDPOST: it should be noted that The Trends Journal reported prior to the war that Jens Stoltenberg, NATO’s secretary-general, was vague on what kind of response the alliance would have in the event of a Russian invasion and has on one occasion clarified that Ukraine is a NATO partner and not a member. (See “UKRAINE CONFLICT HEATS UP: PUTIN RECOGNIZES DONETSK, LUHANSK AS INDEPENDENT FROM UKRAINE.”)