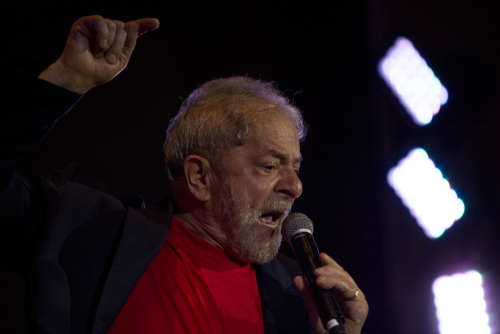 Luiz Inácio Lula da Silva, the former president of Brazil who is leading in the polls in this year’s election, came out strongly, again, against the U.S. intervention in Ukraine.

Lula, who is enjoying a 21-point lead over incumbent Jair Bolsonaro, questioned the U.S.'s judgment after Washington poured $40 billion in weapons into Ukraine while the country is dealing with record-high inflation. He also mentioned the baby formula shortage.

“Biden, who has never made a speech to give $1 to those who are starving in Africa, finances $40 billion to help Ukraine buy weapons,” he said. “This can't be!”

As we reported in the Trends Journal last month, the former leader, who was jailed in 2018 on corruption charges only to have them overturned, said that Ukraine President Volodymyr Zelensky shared blame for the war.

“I see the president of Ukraine, speaking on television, being applauded, getting a standing ovation by all the parliamentarians. This guy is as responsible as Putin for the war,” he said.

Lula said Zelensky should have ignored Western officials and acknowledged Russia's security concerns when it came to NATO expansion and that “We should be having a serious conversation. OK, you were a nice comedian. But let us not make war for you to show up on TV.”

He noted that the U.S. had the political clout to avoid the war, but instead incited it. (See “BRAZIL’S LULA SAYS UKRAINE’S COMEDIAN SHARES BLAME FOR WAR.”)

“Biden could have taken a plane to Moscow to talk to Putin. This is the kind of attitude you expect from a leader,” he said.

He continued, “In the same way the Americans persuaded the Russians not to put missiles in Cuba in 1961, Biden could have said, ‘We’re going to speak a bit more. We don't want Ukraine in NATO, full stop.’ That's not a concession.”

Lula, the leader of the Brazilian Workers' Party, brought up Zelensky’s desire to be on camera and said it seems as though “he's part of the spectacle.”

TRENDPOST: Luiz Inácio Lula da Silva also criticized the West for the sanctions against Russia that have badly damaged economies that still have not recovered from COVID-19 lockdowns.

“And now we are going to have to foot the bill because of the war on Ukraine,” he said. “Argentina, Bolivia will also have to pay. You’re not punishing Putin. You’re punishing many different countries, you're punishing mankind.”

The Trends Journal has been opposed to Biden sanctions since they were announced and forecast that they will do nothing to stop Russia's invasion.

Since the war started, the U.S. has been a total cheerleader for Ukraine and has provided it with some $56 billion of weapons of death.

There is also no evidence that, even with the new weapons—which include advanced rocket systems—that Ukraine can take back any ground lost to Russia. And, there are reports of Russia destroying weapons and equipment sent to Ukraine as they arrive.

The New York Times’ editorial board even admitted last week what we had said before the war started: “it is still not in America’s best interest to plunge into an all-out war with Russia, even if a negotiated peace may require Ukraine to make some hard decisions.”