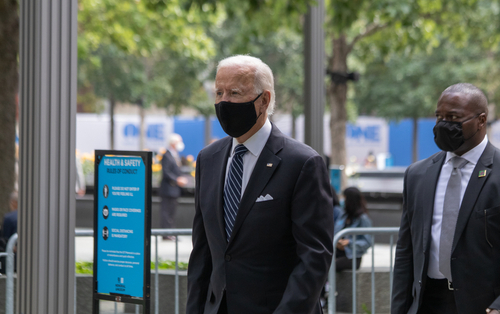 President Joe Biden visited the Lockheed Martin factory in Troy, Alabama, on Tuesday to praise workers producing the Javelin anti-tank missiles that have been instrumental in Ukraine's fight against the invading Russians.

He said Americans should be proud of contributing to the war effort through their tax dollars. He said “every American taxpayer is directly contributing” to the war and “that’s something we can all be incredibly proud of.”

He told the approximately 600 workers there that he visited the facility to thank them from the bottom of his heart. (See “THE BIDEN BOMBER. WAR IS HIS RACKET” and “BIDEN ANNOUNCES $800M IN NEW MILITARY AID FOR UKRAINE.”)

“You’re making it possible for the Ukrainian people to defend themselves without us having to risk getting in a third world war,” he said.

Lockheed said in a statement that the Pike County facility assembles and stores the company’s missile program, which includes the Javelins. The facility also develops the Terminal High Altitude Area Defense [THAAD] missiles, the Joint Air-to-Surface Standoff Missile, and the Joint Air-to-Ground Missile.

The Javelin has been useful for Ukrainians because it is relatively easy to use, and it guides itself to the target after launch, “allowing the gunner to take cover and avoid counterfire."

"Soldiers or Marines can reposition immediately after firing, or reload to engage another threat,” Lockheed said. The missile has the ability to climb above its target “for improved visibility and then strikes where the armor is weakest.”

William LaPlante, the undersecretary of Defense for acquisition and sustainment, announced last week that the Pentagon moved $1.45 billion to the Army and Marine Corps to replenish the Javelins that have been sent over to Ukraine.

“Following the required 30-day notification to Congress, the first tranche of funds, roughly $1.45 billion, was transferred to the Army and Marines earlier this week to procure replenishment stocks of Stingers, Javelins and other key components,” he said, according to The Hill.

The report pointed out that the U.S. has given Ukrainians about 5,500 Javelins since the start of the war. Sen. Richard Blumenthal took to Twitter last week to announce that the U.S. sent Ukraine about a third of its Javelins. Blumenthal posted that it would take a year to produce 1,000 of them.

John F. Kirby, the Pentagon press secretary, said the military has not seen any “negative impact on our ability to defend this nation across a range of military capabilities, and that “We judge it all as a conglomerate of what's our ability to meet this particular mission set, realizing that a Javelin isn't the only capability you have against armor.

Jim Taiclet, the CEO of Lockheed Martin, joined CBS News on Sunday to discuss his company's contribution to the war effort.

He said the U.S. learned by watching the Ukraine War that it is important to have "superior systems in large enough numbers."

"So we know there's going to be increased demand for those kinds of systems from the U.S. and for our allies as well and beyond into Asia-Pacific, most likely too," he said.

TRENDPOST: Taiclet said his company will nearly double production of the Javelin this year to meet the demand. But what is missing from the headlines is that U.S. Secretary of Defense Lloyd Austin sat on Raytheon's board—which is the second largest member of the U.S. military industrial complex—before President Biden brought him on board.

These missiles are produced jointly with Raytheon, Austin's former employer that paid him $1.7 million when he exited his post for the top defense job.

The bloodshed in Ukraine is continuing at a rising rate and all the Biden administration can talk about is sending more Javelins to Kyiv.

Ukrainian troops from the Azov Regiment have been holed up inside the Azovstal steel plant in Mariupol. “We are basically dead men,” Lt. Ilia Samoilenko told reporters. “Most of us know this.”