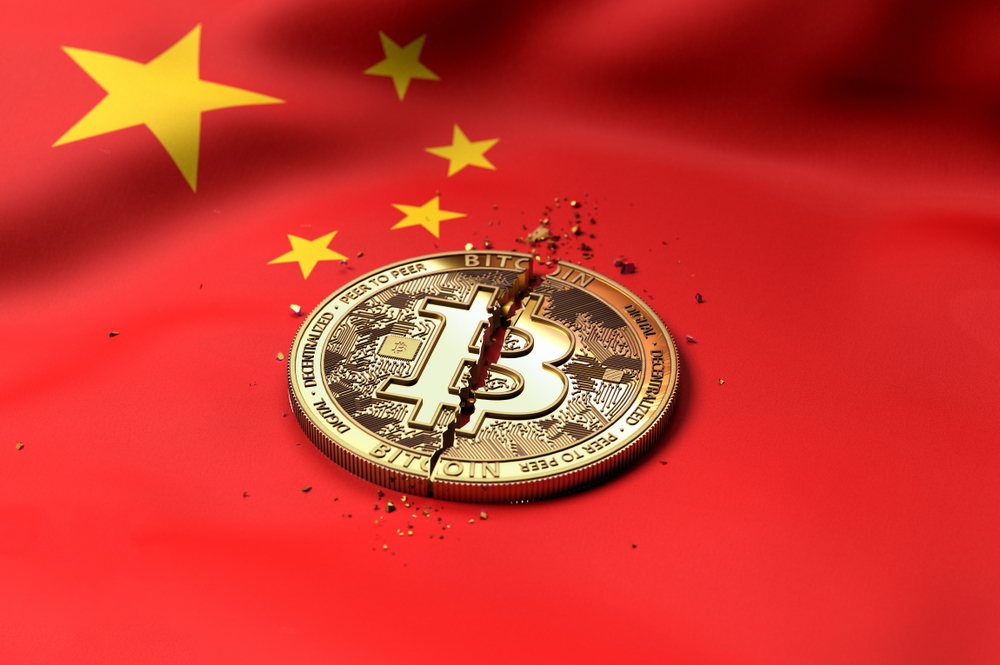 CHINA AND U.S. FOCUS ON CRYPTOS. 2021 was the year of “The COVID WAR”, as Gerald Celente has famously named it. 2021 may well be seen as the definitive launch of “The Crypto Wars”.

On one side are elite authorities used to manipulating fiat currencies for their own narrow gains in wealth and power. On the other side are a group of innovators intent on building mechanisms of exchange and value that aren’t controlled or even controllable by any centralized group.

Within the past two weeks, China and the U.S. both made big moves. China pulled the plug on Bitcoin mining (occurring via commercial scale arrays of computer systems) centered in the Sichuan province. After the regime’s order, 25 of the largest mining firms ceased operations. Bitcoin, already stuck below $36,000, quickly dropped 10 percent.

In the U.S. the House of Representatives passed something called the Consumer Safety Technology Act. It includes a provision that would require the the Department of Commerce and the Federal Trade Commission to assemble a report on blockchain’s use in trade, purportedly to “fight fraud”.

One of the chief sponsors, Darren Soto (D-Fl) said the report would hopefully lead to a formal regulating mechanism for blockchains: “[It’s] a first step towards our long-term goal of setting up a Blockchain Center of Excellence in the Department of Commerce.”

Another part of the overall legislation is called “The Digital Taxonomy Act”. It acknowledges that “the use of digital tokens and blockchain technology is likely to increase in the future,” and mandates the FTC to compile a report on unfair and deceptive practices in crypto markets.

The superpower moves overshadowed, at least for the moment, positive news for cryptos centering around wider adoption in Central and South America.

But perhaps the overall takeaway is that Cryptos now have the full attention of the world. Even news that a major hedge fund folded due to losses on “naked short” bets against GameStop on Wall Street seemed like a side story.

LONGTIME CRYPTO HOLDERS ARE BUYING. The largest decentralized blockchain projects, Bitcoin and Ethereum, both saw mostly downward volatility continue. After dipping briefly below the $30,000 mark, Bitcoin recovered to a trading range of 33 to 36-thousand. Likewise, Ethereum broke below $2000.

Long-term holders of Bitcoin increased their stores last week, while short-term holders were selling. That’s according to market analysts including Glassnode, which tracks activity of bitcoin addresses.

Long-term crypto investors aren’t panicking. They’re buying on the dips. An interesting chart shows some of the downturn and upturn cycles over the history of Bitcoin: 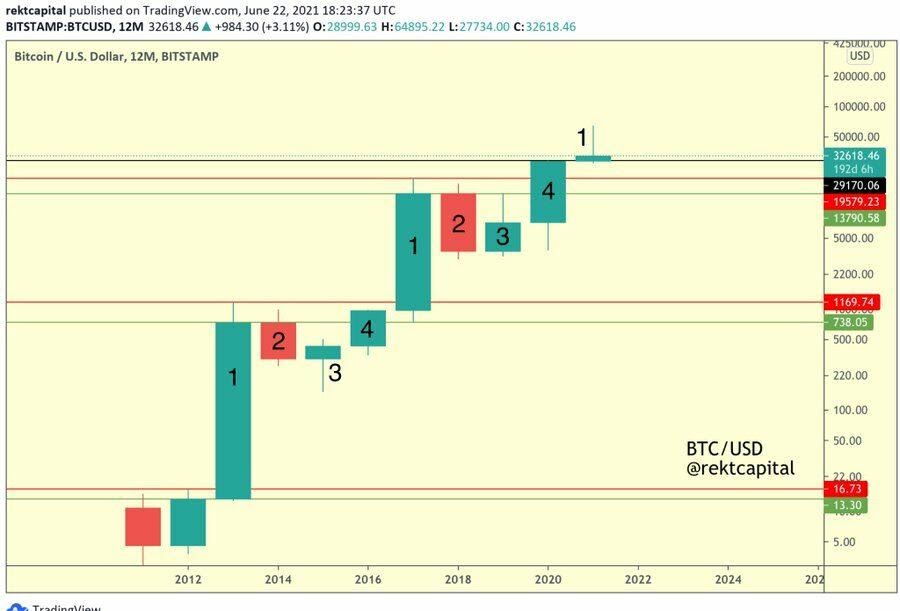 The chart shows a “four-year cycle” of Bitcoin downturns. In order to be in line with previous downturns, Bitcoin would have to drop below 20-thousand. So far, that hasn’t happened.

Bitcoin and Ethereum remain a huge crypto focus, since together they directly represent around 70 percent of all decentralized block chain based projects. Add in crypto projects and tokens built off Ethereum’s “smart contract” software platform abilities, and that market cap number easily tops 80 percent.

CHINA HAS JUST MADE BITCOIN MINING EASIER. China succeeded in shutting down as much as 90 percent of Bitcoin mining in its country. But the move will actually result in cheaper and more efficient mining elsewhere.

Why? The reasons are literally built into Bitcoin’s protocol.

Why Bitcoin Miners Will Take Up The Slack

The first factor involves the 21 million hard cap on the number of bitcoins that can ever be produced. The protocol reduces the total amount a miner can accumulate, based on the amount of miners, and remaining amount of bitcoin that can be mined.

The second factor has to do with Bitcoin network activity. The “hash rate” complexity of solving problems (called “proof of work”) in order to mine and transact bitcoin, and earn a portion as a reward, goes down when network activity drops off.

To sum up the effect of China’s crackdown move, the number of miners just went down, and so did network activity. The network will automatically respond by making bitcoin easier and more rewarding to mine. Kevin Zhang of the crypto mining firm Foundry explained the current situation on CNBC:

“As more hashrate falls off the network, difficulty will adjust downwards, and the hashrate that remains active on the network will receive more for their proportional share of the mining rewards.”

Of course, the market price of Bitcoin also affects the profitability of mining. But miners wouldn’t be engaged in the business to begin with if they didn’t believe the rewards would be there.

PARAGUAY FOLLOWING EL SALVADOR’S MOVE TO BITCOIN. This past Thursday, Paraguay became the second nation in the world to formally propose Bitcoin as legal tender.

Carlitos Rejala, a member of parliament who has been a vocal proponent of Bitcoin, verified the bill proposal. If the measure passes, Paraguay will become the second country to recognize Bitcoin as its official currency. According to Carlitos, the bill will assist the country in the road to economic growth for the future generation.

The announcement comes at a time when Bitcoin prices have been pinned down by moves in the U.S. and China. One of the perverse outcomes for those superpowers is that Bitcoin is easier to accumulate at the moment for nations considering taking the plunge.

Central bank aligned entities including the IMF and its World Bank have also vocally opposed El Salvador’s move. But the World Bank’s own charter makes it clear they have no legal authority to stop countries from using Bitcoin for legal tender, as reported in our 22 June, 2021 Trends Journal article “EURO THREATS NOT STOPPING CRYPTO MOVES.”

South American countries have been more open to adopting Bitcoin because they believe it will offer them a competitive advantage over other countries and help them emerge as the next financial superpower.

Paraguay reportedly will bring its advantages in cheap renewable energy to play in mining bitcoin. Backers of the legislation believe Paraguay can become a crypto hub. Several stakeholders are collaborating with Rejala to submit measures to further those goals.

TAPROOT UPGRADE SET TO ADD VALUE TO BITCOIN. Taproot, a “Bitcoin Improvement Proposal” of upgrades that would improve Bitcoin scalability and security, has now been accepted by over 90 percent of Bitcoin miners, as of 12 June, 2021.

As previously noted in our 18 May, 2021 article “WILL ‘TAPROOT’ UPGRADE HELP BTC REBOUND?”, Taproot improves some of the issues associated with the huge increase of use of the bitcoin blockchain network. Those issues involve computing power (and thus energy consumption) needed to process bitcoin transactions, speed of transactions, and transaction fee levels and privacy.

But industry insiders also believe Taproot upgrades that introduce the ability to execute “smart contracts”, similar to the Etherum network, might be an even bigger deal.

Now that over 90% of Bitcoin miners have approved, the Taproot update process has officially been set in motion. Miners will need to be operating with the upgrades by November.

Ethereum obviously has the lion’s share of decentralized app building right now. But if developers begin using the new functionality Taproot provides to Bitcoin, the long term demand for the world’s original decentralized crypto will likely be bolstered.