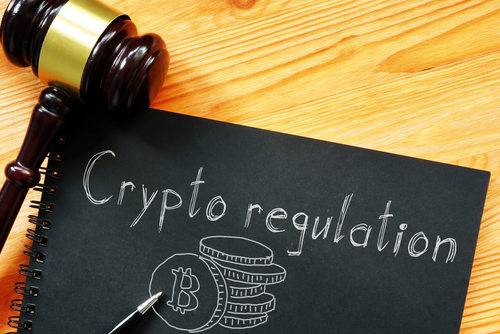 SEC REBUKED FOR “REGULATION BY ENFORCEMENT” BY CFTC COMMISSIONER

CFTC commissioner Caroline D. Pham characterized the SEC charges as “gotcha” style regulation by enforcement that only muddied the situation.

Pham also spoke up for her own agency’s role regarding crypto regulation and more specifically, insider trading enforcement authority.

Regarding the SEC suit naming various cryptos as securities, Pham noted that it was important to provide regulatory clarity to the crypto sector, rather than to pounce with ill-considered enforcement actions.

Pham noted there were “open questions around some of the tokens that are described in the complaint, particularly utility tokens and those involving DAOs (Decentralized Autonomous Organizations).”

Pham said it was important to establish a clear route toward regulation and compliance by focusing on using tools “that don’t involve bringing enforcement cases.”

The CFTC commissioner then called out the SEC suit regarding Coinbase as disruptive, and added “People need to know what the rules are so they can follow them. I don’t believe in any kind of ‘gotcha’ regulation, where the rules are constantly changing on people and they don’t know what they’re supposed to be doing.”

The Coinbase case involved an employee who gave insider information to a relative and a friend, regarding coins that were about to be listed on that exchange.

New coin listings on significant exchanges like Coinbase often result in at least temporary upward price momentum in the coins.

Even before Pham’s remarks, others were pointing out that the SEC move to use an insider trading abuse case to class multiple cryptos as securities, was ham handed and harmful, to say the least.

The intra-government regulatory spat found more perspective via other comments this past week.

The “crypto winter” rally which has seen Ethereum and Bitcoin lead a general market upturn from the deep lows of Spring 2022 has only moderately improved Ripple Lab’s XRP token price.

The ongoing SEC lawsuit has been an obvious drag, but a newly released Q2 company report offered some optimism.

The business acknowledged that it is aggressively seeking a resolution to the SEC action, according to ambcrypto.com. Its report emphasized that the absence of regulatory clarity has been a significant roadblock for the whole cryptocurrency sector, not just Ripple.

The report also revealed that Ripple is building an NFT presence. Via a collaboration with FLUF World, a new blockchain called Root Network, will facilitate the NFT venture.

The network will utilize XRP to pay for gas.

Some speculators may be warming up the current crypto winter. But it would be well to remember that gone are the days when cryptos operated among a strata of coding “cipher punks” and disaffected millennials out to leave corrupt and controlling legacy financial and tech powers behind.

Macroeconomic conditions and world events will decide when the crypto winter is over.

No matter what the current climate, investors (not speculators) would do well to continue to research and identify areas where crypto powered blockchains and DLTs (Distributed Ledger Technologies) are providing innovations and utility.

Unfortunately, 2021 saw such a meteoric rise of cryptos not only in price, but the public conscience, many people’s first dabbling (or plunge) into the sector happened at or near a major cycle peak.

When the sector crashed even harder than the stock market in early 2022, it didn’t exactly earn credibility with many who were already having trouble wrapping their minds around the technology.

The recent lows of Ethereum (ETH), with over 4,000 development projects running on the network, and Solana (SOL), with over a thousand projects, can be viewed as a second chance for investors.

Projects offering much needed blockchain interoperability, like Quant (QNT), Cosmos (ATOM) and Chainlink (LINK), hit lows along with the sector as a whole, and are still considerably down from their all-time highs.

The glass half-full view is that the crypto crash is a second chance to catch the wave when it significantly rises again, as it likely will, sooner or later.

During the crypto winter, development and disruption haven’t gone dormant. Quite the opposite. That’s because the technology and the possibilities for transforming whole sectors of the economy, and the way people interact and live, is quite real.

Permissionless public blockchain technologies are opening doors to participation in a wide array of innovations in a way that even the internet itself may only prove to have been a prelude.

Along with AI (Artificial Intelligence and IoT (Internet of Things), crypto technology has been identified as part of a “trivergance” of fast evolving technologies. (See “THE TRIVERGENCE: A BUZZWORD FOR EMPOWERMENT OR ENSLAVEMENT?” 19 Jul 2022.)

We would add that genetic technologies including Synbio (Synthetic Biology) and Bio Pharma represent a fourth component of this revolution. (See “SYNBIO AND BIO PHARMA: YES, THERE’S HUGE UPSIDE,” 15 Mar 2022.)

So maybe what’s happening is more of a “Quadvergence.”

The point is that cryptos are disrupting and changing legacy technologies and ways of doing things.

It goes far beyond Bitcoin, though Bitcoin and Ethereum have certainly led the crypto revolution, and will likely continue to do so.

Larry Fink of Blackrock, a one-time crypto doubter, embodies as well as anyone the turning tide of institutional attitudes toward the sector.

Blackrock took a stake in Circle, which issues the USD stablecoin, currently the second largest of its kind in the crypto sector.

Earlier this year, Blackrock CEO Larry Fink said the investment management firm was “studying digital currencies, stablecoins, and the underlying technologies to understand how they can help us serve our clients,” a notably positive signal toward the sector.

Dowd said in an interview that “robust” cryptocurrencies would get past the current downturn and emerge as major forces to be reckoned with.

He specifically called Bitcoin “the Amazon of the crypto era.”

Bitcoin’s underlying technology, transparency, and the freedom it provides will undoubtedly help the asset overcome the issues, Dowd argued, according to cryptopotato.com.

Dowd noted that the advantages of BTC such as transferability, not needing to store it in physical vaults, and other aspects, made it an attractive digital commodity.

Others remain more pessimistic, arguing the bottom and full bust that will shake out weak projects still has a ways to go.

Scott Minerd, Managing Partner of Guggenheim Partners, is one of those. As reported by ambcrypto.com, he said about the current market conditions:

“I think it’s going to have to deflate further, and we’re going to have something similar to the collapse of the Internet bubble where we have a chance to sort out who are the winners and who are the losers here. And I don’t think we have fully flushed out the system yet.”

The fact is, China’s moves against bitcoin in mid 2021, and then all cryptocurrencies, represented a rejection of a wide swathe of innovation, for ideological and even existential reasons.

That’s the problem with any command and control system: it can’t abide not having control. (See “THE GEOPOLITICS OF BITCOIN,” 27 Jul 2021.)

It’s why China has certainly achieved some high-tech milestones, but only by substantially infiltrating relatively open societies and stealing huge amounts of IP (Intellectual Property).

And that’s not really innovation, is it?

Innovation requires a certain amount of openness and freedom. That’s the Achilles heel of China.

Unfortunately, via Agenda 2030 and other restrictive command and control regulatory schemes, it’s becoming a huge self-imposed drag on Western countries as well. (For more on that, see “HOW ‘IMPACT INVESTING’ IS BAMBOOZLING INVESTORS TO IMPOSE A WOKE AGENDA” in the Trends In Technocracy section of this issue.)

Regarding blockchains and how cryptos fit into the innovation, a recent article at Cointelegraph.com, “Can blockchain be used without cryptocurrency?” represents a good primer, and provides some insights about Smart Contract technology as well.