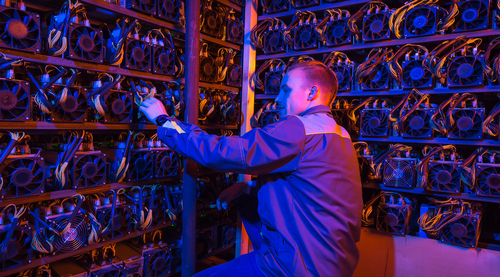 MORATORIUM ON BITCOIN MINING IN NEW YORK.  Despite cheap hydroelectric power, and the highest net outflow of people fleeing the state because of a poor economic environment and other facts, NY is on the edge of cutting off new mining of the sector’s most historically successful asset, bitcoin.

This past Friday, the State Senate voted to impose a two-yearmoratorium on new PoW mining projects powered by carbon-based fuel throughout the state.

Existing mining firms or ones currently undergoing the permit renewal process would be allowed to continue operations. The Senate voted 36-27 in favor of the bill.

A bill will now go before Governor Kathy Hochul, who is likely to sign it.

The move severely undercuts New York’s supposed push to add cryptos as a “financial related sector,” in a state that is bleeding residents to Florida and even New Jersey, because of its policies.

NYC Mayor Eric Adams, who some say has aspirations to mount a Democratic primary challenge to Joe Biden in 2024, evidently did not have enough pull to prevent the state legislature from enacting the bucket of cold water on the crypto industry.

Other States Will Fill Vacuum of NY Crypto Crackdown

Many had predicted the bill to die in committee, as a similar bill did last year.  But this time, that didn’t happen.

Previously Sen. Todd Kaminsky, a Long Island Democrat who chairs the Environmental Conservation Committee, told CoinDesk.com the proof-of-work moratorium bill could lead to “deleterious economic consequences for New York if people perceive it as being hostile to crypto.”

In April Mike Colyer, the CEO of Foundry, a Rochester company focused on the digital currency market, commented:

“Voting for [the moratorium] bill is a vote AGAINST BITCOIN, Crypto, and Blockchain technology. I would not want my name attached to it. Imagine voting with the one person that wanted to shut down the internet 30 yrs ago.”

According to The Daily News, Foundry added that the company recently surpassed 100 employees, with plans to double that number by the end of the year. The company argued:

“A moratorium on #bitcoin mining will take NY out of the game as our industry flourishes elsewhere, generating jobs and tax dollars in other states that are more welcoming.”

But an eleventh-hour referral of the bill from the Environmental Conservation Committee to the Senate Energy and Telecommunications Committee, led to the bill being considered by the full Senate only hours before the close of the legislative session at midnight.

Coindesk noted that a number of mining businesses had already promised to leave the state for friendly places like Texas, if the legislation was passed.

The CFTC would replace the SEC as crypto's prime regulator under a major new bill proposed by Senators Cynthia Lummis and Kirsten Gillibrand. Legislation: H.R.7614 - Digital Commodity Exchange Act of 2022.