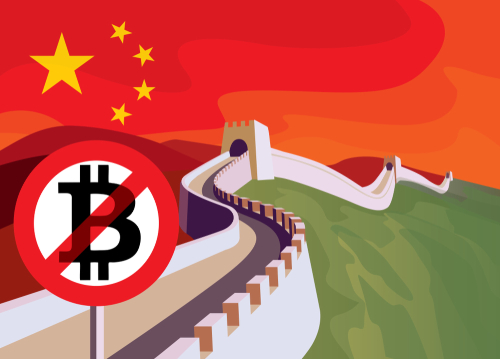 The central financial organ announced a prohibition of financial institutions and non-bank payment institutions from providing services to activities and operations linked to cryptocurrencies.  That’s according to CNBC.

Bitcoin and the cryptosphere in general didn’t think much of China’s latest attempts to torpedo the revolution. Bitcoin dipped 5 percent, a blip compared to the surges and dives that have characterized a choppy, but overall upward summer.

The story of China’s increasingly strident moves against cryptos has to do with the technology itself. Permissionless blockchains, cryptographic keys to digital property that can’t be confiscated, and decentralization and privacy that can’t be easily thwarted, all spell big trouble for China’s system, more than any other on earth.

And that doesn’t even touch on all the incredible revolutionary efficiencies and use cases which are exploding in the crypto world, creating value and wealth. It’s not an exaggeration to say that crypto networks are already changing the way people are accruing and controlling the fruit of their labor and interactions.

“China is worried because bitcoin gives its citizens the freedom to teleport their wealth around the world instantly at the click of a button—side-stepping the short-sighted, arbitrary capital restrictions that Beijing is no doubt planning in response to the Evergrande debacle.

“If recent price action is anything to go by, their concerns are well-founded. A global superpower just declared war on bitcoin... and the market barely even noticed.”

SENATOR ECHOES “TRENDS IN CRYPTOS” ABOUT U.S. CRYPTO OPPORTUNITY. We previously reported that China’s need to exert political control to maintain its oppressive communist system is a weakness that the West could exploit via the crypto revolution.

“China’s system cannot take advantage of the decentralized blockchain revolution, because their political, and increasingly, their economic vision is directly opposed to the decentralization and autonomy literally embodied in the code of blockchain protocols.

“The U.S. and the western nations that still, at least by heritage and a residue of common experience, value freedom, have an opportunity right now. They can embrace the crypto revolution. China can’t. By supporting crypto innovations, the West can supercharge its economies, and move to restore the integrity of money.”

Now at least some politicians are catching on to the idea. Senator Pat Toomey (R-PA) echoed this line of thinking in 24 September tweet:

“China’s authoritarian crackdown on crypto, including #Bitcoin, is a big opportunity for the U.S. It’s also a reminder of our huge structural advantage over China.

“Beijing is so hostile to economic freedom they cannot even tolerate their people participating in what is arguably the most exciting innovation in finance in decades. Economic liberty leads to faster growth, and ultimately, a higher standard of living for all.”

The decision to prohibit crypto trading comes after a bitcoin mining crackdown early in the summer.

China attempting to restrict the emergence and use of cryptos is not exactly new. Over the years it has periodically warned its citizens against using Bitcoin, for example.

But with the country now aggressively rolling out its digital Yuan, a currency it centrally controls and can granularly surveil and cut-off, China appears ready to enforce its anti-crypto policies more stringently.

The U.S., meanwhile, has had its own muddled response to the crypto phenomenon. As cryptos decisively broke into the mainstream in 2021, prominent figures including Janet Yellin and Jerome Powell have periodically talked them down. Senator Elizabeth Warren (D-CT) has been among the most vocal anti-crypto voices, calling for tight regulation, and even criminalizing some use cases, ala China.

The recent ham-handed inclusion of crypto regulation provisions in an infrastructure bill, was another indication that the U.S. has no coherent approach, let alone any strategic vision.

Some observers believe that Securities and Exchange Commission Chair Gary Gensler is honestly trying to figure out how to regulate the crypto space in a way that satisfies both advocates and skeptics.

But that’s not much of a vision either.

Instead of complaining about the privacy and efficiency of cryptos, or dealing with them in a reactive and often negative manner, Western politicians would do well to recognize their revolutionary power to create wealth and economically evolve in ways China can’t allow.

For more on China’s blunder and the West’s opportunity, read:

SCAMMING FEDERAL RESERVE PROMISES TO “DO BETTER.” The same Federal Reserve that has helped the term “stagflation” make a comeback, and lost more credibility thanks to an insider trading scandal, is painting cryptocurrencies as a criminal “failure.”

Chairman Jerome Powell told a Senate Banking Committee in mid-September that cryptos were not a viable payment method, and were only being used by “privacy diehards.”

"With cryptocurrencies, it's not that they didn't aspire to be a payment mechanism, it's that they've completely failed to become one, except for people who desire anonymity, of course, for whatever reason," he told Sen. Cynthia Lummis of Wyoming.

Powell’s suggestion was that privacy likely had a criminal intention.

But if the Fed Chairman is interested in rooting out criminality, there’s plenty of action to be had in-house.

The savings of Americans are being eroded by money printing at a pace that has even longtime observers sounding alarms.

The spiral is forcing people to try to stay ahead of the inflation monster with riskier investments, in traditional markets and the cryptosphere.

That risk-taking can be tied directly to disastrous policies of stimulus-addicted governments and their central banks.

If that weren’t enough, this past week Powell was in the halls of Congress again, answering for a scandal involving regional Fed officials being caught using their positions and insider status to make propitious investments.

According to recent filings, the two traded assets that were likely affected by Fed policies last year.

"The trust of the American people is essential for us to effectively carry out our mission," he said, while claiming he had no knowledge of the activities of the higher-ups working under his authority.

He announced an in-house “comprehensive review of the ethics rules around permissible financial holdings and activity by Fed officials.”

Kaplan and Rosengren are admitting no wrongdoing. They have both stated that their transactions didn’t violate the letter of current ethics rules.

Neither is currently inclined to relinquish the gains from their investments, though they announced they would sell the security holdings in question and hold the resultant funds in broad indexes and cash instead.

Powell, meanwhile, signaled that no significant repercussions for Kaplan or Rosengren would result from the insider trading. The reason? Only now are the current rules seen as inadequate.

According to Powell, “[the current rules] are now clearly seen as not adequate to the task of really sustaining the public’s trust in us. We need to make changes and we’re going to do that as a consequence of this.”