$60 THOUSAND MORE LIKELY THAN $20 THOUSAND FOR BITCOIN. Senior commodities analyst at Bloomberg Intelligence, Mike McGlone, believes Bitcoin (BTC) has a greater chance of rebounding to $60,000 than falling below its present support level of around $30,000, and dropping down to $20,000.

McGlone compares Bitcoin's current price movement to the "too-cold" period of the 2018–2019 trading session, according to a snapshot from his recent research.

McGlone, a Bitcoin bull, believes that BTC may stage a similar surge in order to reach a new resistance objective of $60,000: “The more tactical-trading-oriented bears seem to proliferate when Bitcoin sustains at about 30% threshold below its 20-week moving average, allowing the buy-and-hold types time to accumulate.”

The Bloomberg expert has said that China’s recent ban on bitcoin mining actually strengthens the bullish prospects for the crypto.

Meanwhile, On-Chain Crypto analyst Will Clemente points to bitcoin illiquid supply ratios as another indication that points to moves higher.

Since the COVID-19 pandemic-induced sell-off in March 2020, Bitcoin's illiquid supply ratio has been steadily increasing. The ratio is determined by dividing BTC's illiquid supply by its cumulative or growing supply. The analyst posted a chart showing the ratio: 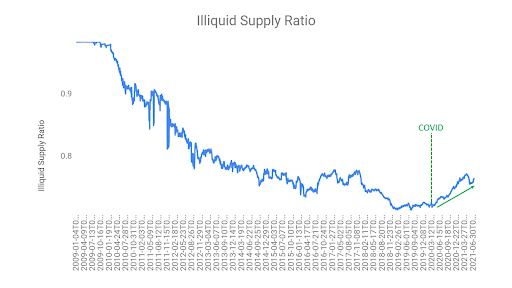 “Here’s a really interesting long-term chart. Following March 2020, record money supply expansion changed investor behavior in the Bitcoin market. This metric shows the trend in the number of illiquid coins relative to overall supply. More coins are being locked up than ever.”

CARDANO SMART CONTRACTS WILL SOON BE WEB BROWSER COMPATIBLE. Cardano (ADA) is currently a major alternative network to Ethereum for DeFi related smart contracts in the blockchain sphere. The protocol, which is governed by a consortium of institutional players, has announced an upgrade that may make its network more attractive by introducing web browser integrations.

The Plutus application backend will be able to operate in Javascript, the most commonly used programming language on the internet.

Cardano founder Charles Hoskinson said in a quick update, originally reported by Cryptobriefing, that the application's backend, which runs in JavaScript, would provide support for web browsers and mobile devices, allowing Cardano's smart contracts to be interoperable with web browsers.

According to Hoskinson, it represents a significant development that is part of the network's journey toward implementing smart contracts and competing with networks like Ethereum and the Binance Smart Chain.

The talk not only was decidedly bullish on the financial aspects of Bitcoin. As the Trends Journal has been reporting in Blockchain Battles, the greater implications of decentralized blockchains shifting power away from small groups of elites, was a major focus of conversation. Interesting stuff, considering the elites involved.

Musk noted the potential of Bitcoin with regard to fraud prevention, thanks to its indelible, transparent ledger, and its resistance to government interference. With Bitcoin, there is no company to haul before authorities. As he put it, “Bitcoin is solving for having no throat to choke.”

Musk also pointed out that holding BTC was a better option than holding cash in some European bank accounts, due to the negative interest rate policies.

“It's weird as hell. It's always evolving. And it just reminded me of the internet when I was a kid. I encountered alt.cypherpunks when I was fairly young. This was a topic of discussion for years. I didn't touch it until 2008 when we started Square.”

Dorsey, like Musk, spoke from his personal experience with "predatory" and "obtuse" financial systems, mentioning some of his motivations for starting Square, a payments processor of choice for small independent and often unconventional entrepreneurs. He said Bitcoin was an opportunity to leave traditional financial systems behind:

Dorsey also pegged one of the major aspects of cryptocurrencies that embodies its revolutionary power (not to mention the meme “fix the money, fix the world”). “Having sound money that is separate from the state is the idea,” he said.

“My hope is that it creates world peace or helps create world peace. Elon said it earlier, we have all of these monopolies on violence and the individual doesn't have power . . . It may sound a little bit ridiculous, but you fix that foundational level and everything above it improves in such a dramatic way. It's going to be long term, but my hope is definitely peace.”

“I really do believe that Bitcoin will be much more environmentally friendly, certainly than traditional gold mining or the traditional financial services sector,” she said. “In many ways, it already is, and it's just going to get better that way.”

Wood said she has personally interfaced with contributors to Bitcoin Core, a Bitcoin protocol development community.

“In terms of talking to them about economics, economic theory, failed monetary regimes historically, they know economic history, many of them, better than anyone I've ever met. So that gives me a great degree of confidence that they do believe they're on a noble mission. They could be getting paid a lot more than they're being paid right now if they worked at Google or Facebook or some of these other areas.”