BILL “I DID NOT HAVE SEXUAL RELATIONS WITH THAT WOMAN” CLINTON, SAYS MOSCOW ‘THE BIGGEST LOAD OF BULL’ 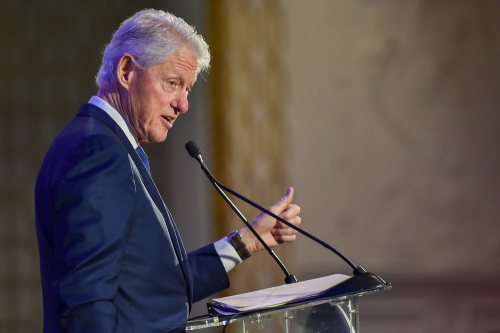 Bill Clinton—the president who first violated the U.S. agreement with Moscow not to expand NATO’s expansion “one inch further,” killed over 500,000 Iraqi children under the age of five with his sanctions and killed thousands more with his bombings... launched the Yugoslav War and sent troops to fight in Sudan and Somalia Wars—said in a lecture Tuesday that the claim that Washington bears some of the responsibility for the Ukraine War is the “biggest load of bull.”

Clinton was addressing the annual Casey Shearer Memorial Lecture at Brown University when he denied claims that his administration worked to isolate Russian President Vladimir Putin on the world stage.

“I do not believe that there was anything we could have done to prevent this,” he said, according to The New York Post. “Ukraine needs to prevail.”

The Trends Journal has long pointed out Russia's security concerns about NATO's extended reach into its backyard, which is the equivalent of China installing missile systems in Mexico and Russia aiming missiles at the U.S. from Canada. (See “NO NEED FOR NATO.”)

The Kremlin identified Ukraine as its red line. The Clinton and George W. Bush administrations were key players in NATO's expansion into the Baltics. And Barack “Nobel Piece of Crap Prize Winner” Obama kept ramping it up with his 2009 declaration that it was important to "send a clear signal throughout Europe that we are going to continue to abide by the central belief ... that countries who seek and aspire to join NATO are able to join NATO."

Shortly after the 24 February invasion of Ukraine, Russian President Vladimir Putin acknowledged in a video address that he asked about NATO membership then-President Clinton during his U.S. counterpart's visit to Moscow. Putin said he asked Clinton about how a Russian membership would go over in the U.S.

“I would not give you all the details of that conversation,” Putin said. “But the reaction to my conversation—look, well, let me put it this way. How did Americans really look at this possibility? You can see it in their practical stance. Open support of the terrorists in North Caucuses, ignoring our demands and concerns, withdrawing from the arms limitation treaties, and so on.”

TRENDPOST: Vladimir Pozner Jr., the French-born Russian-American journalist, once addressed Yale University and mentioned how Putin’s NATO ambitions were refused by the alliance. Pozner said one of the first things Putin did was ask for Russia to become a member.

“Why not be a member of NATO?” Pozner asked. “NATO was created to defend Europe and perhaps not only Europe from Soviet aggression, from a country that you couldn’t predict. There is no more Soviet Union, and there is no more Warsaw Pact. Why can’t we create an organization where we are part of it, said Mr. Putin, and act together to protect from some kind of aggression. He was told, ‘Go take a walk,’ basically.”

(Clinton did not respond to an email inquiry from The Trends Journal.)

Clinton recently wrote in the Atlantic about his time in office and his interactions with the Kremlin. He wrote that he met with [Boris] Yeltsin 18 times and Putin five times—"twice when he was Yeltsin’s prime minister and three times in the 10-plus months that our terms as president overlapped. That’s just three short of all the U.S.-U.S.S.R. leaders’ meetings from 1943 through 1991. The idea that we ignored, disrespected, or tried to isolate Russia is false. Yes, NATO expanded despite Russia’s objections, but expansion was about more than the U.S. relationship with Russia.”

Clinton said there was never anything preventing Russia from joining NATO besides Russia itself. “Putin did a pretty good job in his first term,” Clinton said. “He was exactly what Yeltsin lofted. protected Yeltsin's family, he was much stronger and aggressive, and healthier.”

Unlike America where the Banksters are “Too-Big-to-Fail,” the Drug Lords run the medical business, the Silicon Valley Gang runs tech, The White Shoe Boys own Wall Street, monopolies control the media and Mom and Pop stores have been destroyed by the “chains”... Clinton warned that Putin would eventually organize a kleptocracy “on steroids.”