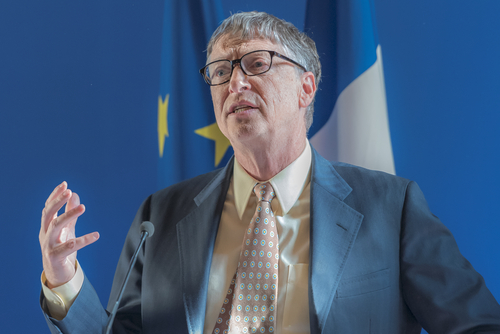 Gates reportedly admitted to Bloomberg News that he was quietly lobbying West Virginia Senator Joe Manchin to be receptive to government funding for a utopian “clean-energy transition,” even before Joe Biden entered the Whitehouse in 2021.

Gates fueled his lobbying efforts in anticipation of a “rare moment in which heavy federal spending might be secured for the clean-energy transition,” Bloomberg reported.

The Washington Examiner noted that Gates again pressed Manchin this past July at the Allen & Company Sun Valley Conference in Idaho, an annual elite meet-up of industry and media.

“We had a talk about what was missing, what needed to be done,” Gates said, regarding the impasse of the Biden legislation. “And then after that, it was a lot of phone calls.”

The Inflation Reduction Act, which is largely about subsidizing non-fossil and non-nuclear energy production, via taxpayer money and regulations impeding and making fossil fuel production more costly and more prohibited.

It pretends to be phasing in more efficient forms of energy production. But if those forms of production, such as solar and wind, or moving to electrical generation for everything from cars to stoves to home heating, were really more efficient, they wouldn’t require the huge subsidy and regulatory favoring that the legislation provides.

The fact is, the green energy lobby, supported by elites like Bill Gates, Michael Bloomberg and Jeff Bezos, who are heavily invested in related technologies, has relied on misinformation and lies regarding practically everything concerning the subject.

For example, the major contention that green technology is more efficient than fossil and nuclear energy, is predicated on using a so-called “LCOE” (Levelized Cost Of Electricity) analysis standard.

That standard fails to take into account the true costs that would entail to build out and maintain systems that could truly replace current energy supplied via fossil and nuclear energy systems.

The sordidly deceptive tale is well detailed by the Manhattan Contrarian.

As to the commonly held belief that governments around the world phasing in UN Agenda 2030 climate change and energy regulations mean to merely replace fossil fuel systems with same capacity green energy alternatives, that too is a huge lie.

Farmers in Europe and Canada have lately found out that Agenda 2030 is about reducing energy consumption allowances for masses of average people living average lives and running average businesses.

A recent interview of historian and commentator Neil Oliver by Canada’s Mark Steyn detailed the scam of Agenda 2030 and the Biden “Inflation Reduction Act.” As the conservativetreehouse.com summarized:

“Build Back Better or Green New Deal (climate change) agenda is not about replacing the system of energy production with a green system that duplicates the output. The intent of the new program is to produce less energy and then modify the uses of the now limited resource.  In one of the examples given, 30 million gasoline powered cars are not expected to be replaced by electric vehicles, a personal transportation system of far fewer vehicles is the goal.”

The Steyn - Oliver discussion can be viewed here.

Gates could hardly contain himself, trumpeting how his “secret” political maneuverings had secured passage of Biden’s Inflation Reduction Act. He tweeted on 12 August about the hundreds of billions earmarked in the bill for green energy subsidies:

“This $369 billion investment will spark innovation, drive job creation, and reduce energy prices and emissions. It sets a clear example of what serious climate action looks like.”

The unmentioned and much more troubling secret is something called Breakthrough Energy.

That’s the investment initiative Gates created in 2015 to capitalize on all that lobbying and seeding of an urgent “climate change” agenda.

The Antora story was covered by CNBC and others.

By manipulating the media and the political sphere to favor and implement green technology which otherwise would fail to be adopted, Gates and other rich elites are steering money into their own investment initiatives and portfolios.

The agenda serves two purposes that have been overriding themes for Gates: population reduction, and personal profiteering under the guise of crusading to save the world.