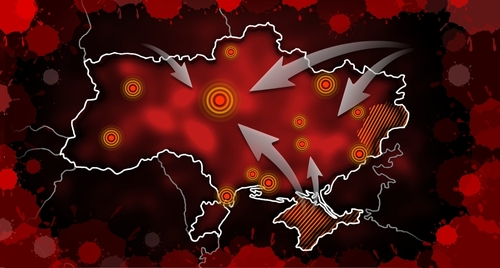 A former top U.S. general said last week that Ukrainian fighters could end up pushing Russian troops back to the border in 2023 by winning the war of attrition because Moscow’s forces are “exhausted” and they “don’t have much else they can do right now.”

Lt. Gen. Ben Hodges told Business Insider that he believes Ukrainian forces are about to make noticeable gains because they can now employ advanced rocket systems.

“It looks to me that wherever the Russians do not have overwhelming firepower advantage, and Ukrainians win 100 times out of 100,” he told the website. “So providing the Ukrainians ability to strike Russian artillery, Russian rockets, their ammunition storage, add command posts, that's what destroys and disrupts the one thing that the Russians have that is to their advantage.”

Retired U.S. military officers who have never won a war in their lives yet pretend to have some insider knowledge about the realities on the ground in Ukraine, and, in most cases, present a rosy picture about the prospects of an eventual Ukrainian victory.

There are a few reasons for this. Agreeing with the accepted consensus in the mainstream media means you’ll be invited to CNN, Fox News, and MSNBC to offer insight, which could lead to a paid “military analyst” gig. (See “U.S. LOST EVERY WAR SINCE WWII, BUT IS TELLING UKRAINE HOW TO BEAT RUSSIA.”)

In the early stages of the war, these would-be analysts insisted that Ukrainian fighters were simply outperforming the Russians, who were supposedly in disarray.

Ret. Gen. David Petraeus, who hasn’t won a war since he’s been in command and was defeated in both the Afghan and Iraq wars, must have received the script at the time.

But now even Kyiv admits that Russia and separatists control some 20 percent of the country. The accepted theory now is that once Ukrainians obtain enough HIMARS and other advanced rocket systems they will even the playing field.

Oleksandr Motuzianyk, a spokesman for Ukraine’s Ministry of Defense, said last week that American-made HIMARS have been used by Ukrainian forces to destroy more than 30 Russian logistic military facilities.

Michael Kofman, a military analyst, told War on the Rocks Podcast that he believes Russian forces will begin to adapt “and change the way they operate to make them less effective."

TREND FORECAST: As we had forecast when Russia invaded Ukraine, which we are totally against, by the U.S. and NATO ramping up the prospects for escalating the War with scores of billions in weapons and aid to Ukraine, WWIII was launched.

And, Russia had the upper hand in the war because of its firepower superiority so it is not surprising that Ukrainian fighters are much more deadly with the Western equipment. (It was estimated last month that Kyiv has one artillery piece to 10 to 15 Russian artillery pieces.)

TRENDPOST: Tracking trends is an understanding of “where we are and how we got here to see where we are going.

On the Ukraine War front, the “how we got here” has been whitewashed from history. Not a word is mentioned of the United States 2014 coup of the democratically elected President, Victor Yanukovych and the role Victoria Nuland, currently America’s Under Secretary of State for Political Affairs, played in the overthrow of its government in 2014.

Indeed, in early February 2014, a recording was leaked of Assistant Secretary of State for European Affairs, Victoria Nuland, telling Geoffrey Pyatt, the U.S. Ambassador to Ukraine, that the UN was on board to “help glue” the plan to replace Ukrainian President Victor Yanukovych with Arxeniy Yatsenyuk.

“Yats is the guy,” Nuland informed Pyatt, urging her to move quickly because “the Russians will be working behind the scenes to torpedo” the deal. “F#&* the EU!” Nuland told Pyatt.

TREND FORECAST: Vadym Skibitskyi, the representative of the chief intelligence directorate of the Ministry of Defense of Ukraine, told Ukrayinska Pravda that Russian military facilities in Crimea are considered a target that can be hit by Ukrainian troops. Should Ukraine attack Crimea, Russia will sharply ramp up its military operations in Ukraine.