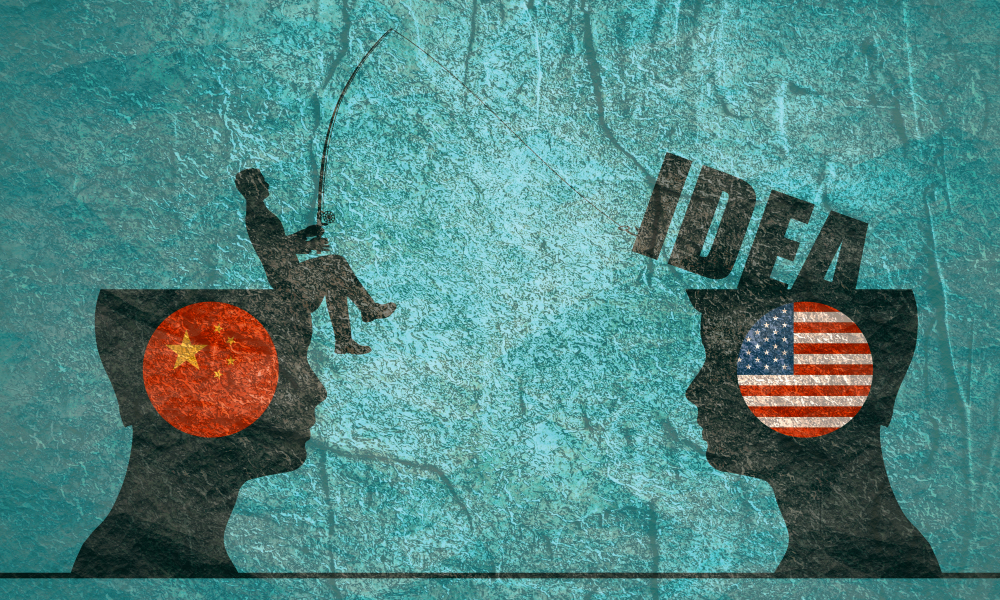 The head of the FBI and Britain’s M15 held a joint press conference last week to talk about the rising threat of Chinese spying amid tensions over Russia's invasion of Ukraine and threats to Taiwan.

Christopher Wray, the FBI head, and Ken McCallum, the British spy head, told reporters in London that Beijing has been using “elaborate shell games” in the business sphere to disguise its spying.

“The Chinese government poses an even more serious threat to western businesses than even many sophisticated business people realize,” Wray said. “I want to encourage you to take the long view as you gauge the threat.”

Wray said there is no sunlight between the Chinese government and Chinese companies and that needs to be understood when it comes to the challenge of spying.

McCallum told reporters that Beijing’s threat is the most “game-changing” to other countries because “it pervades so many aspects of our national life.”

Bullshit Has Its Own Sound

To put this into perspective, Philip Giraldi—a former CIA station chief and military intelligence officer and now executive director of the Council for the National Interest, a US-based non-profit anti-war advocacy—told Sputnik news, “What strikes me immediately about this joint performance is the sheer hypocrisy of it.”

Confirming what we have long forecast, Giraldi noted that “... of course, there is the irony that this anger expressed by the UK and US will be counterproductive as it will only serve to drive China and Russia closer.”

Indeed, the world has made a significant shift since Russia's 24 February invasion. On one side there’s the closer unification of the United States and NATO, on the other side, Russia and China.

The joint conference was seen as a sign of the close relationship between agencies and how they believe a joint effort is required to counter China. Beijing has been accused of stealing intellectual property from Western tech companies.

“The Chinese government is set on stealing your technology—whatever it is that makes your industry tick—and using it to undercut your business and dominate your market,” Wray told the audience, which was mainly comprised of business people, according to The Wall Street Journal. “They’re set on using every tool at their disposal to do it.”

McCallum followed the comments by accusing Beijing of engaging in a “coordinated campaign on a grand scale” to win a “strategic contest across decades.

Commenting on their ready to “act,” act. Giraldi noted that, “As a former intelligence officer, I am reflexively skeptical of claims of ‘breathtaking’ or ‘immense’ Chinese illegal activity and threats without evidence to back up those assertions.”

Giraldi said McCallum and Wray “have provided no such evidence and their bluster should be dismissed as little more than the latest political smokescreen sent up to bolster the fortunes of the foundering governments in Washington and London that seem to have lost the art of diplomacy and are instead relying on innuendo against their perceived enemies.”

TRENDPOST: The Trends Journal has long forecast that the next century will belong to China. (See “TOP TRENDS 2021: THE RISE OF CHINA.”) We also pointed out that one of President Joe Biden’s first moves after taking office was to inform the country that his top priority as president is to make sure the U.S. keeps its edge over China. (See “CHINA TASK FORCE: U.S. APPROACH TO BEIJING” and “BIDEN VS. CHINA’S BELT & ROAD INITIATIVE: U.S. LOSES.”)

Wray told reporters at the M15 headquarters that the countries want to “send the clearest signal we can on a massive shared challenge—China.” He said taking on China is a priority if “we are to protect our economies, our institutions and our democratic values.”

TREND FORECAST: The United States and Europe will lose in the economic challenge against China. While President Biden stated that Beijing would not surpass Washington in power during his term in the White House, that has zero to do with U.S. policy or the Biden administration.

The hard facts and analyses project China to surpass the U.S. as the world’s largest economy by 2028.

As we have been reporting, former President Bill Clinton brought China into the World Trade Association in 2000 (which Senator Joe Biden supported), and China’s GDP at the time accounted for a 3.6 percent share of the world’s economy. Now, just 20 years later, it has grabbed a nearly 18 percent share.

Thus, as China expands its domestic economy and continues to develop its BRI, it will continue to grow in financial and military power as the United States and Europe decline.