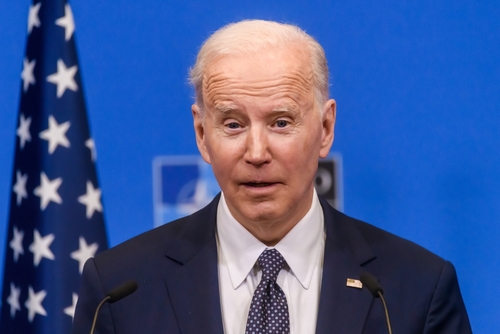 President Joe Biden said Thursday that he will ask Congress to speed up a controversial procedure to allow his administration to sell yachts and other assets that were seized from Russian oligarchs since the start of the Ukraine War.

“We’re going to seize their yachts” and the U.S. will sell off funds that will be used to directly remedy the “harm that Russia caused and help rebuild Ukraine,” he said.

The proposal is not just limited to luxury yachts. Biden wants to be able to sell seized aircraft, bank accounts, and other assets of these Russian oligarchs, The New York Times reported.

Biden made the announcement while urging Congress to approve $33 billion in new economic and military aid for Ukraine. He admitted that the “cost of this fight is not cheap.”

“But caving to aggression is going to be more costly if we allow it to happen,” he said. “We either back the Ukrainian people as they defend their country, or we stand by as the Russians continue their atrocities and aggression in Ukraine.”

The House on Wednesday passed a bill that would allow the president to sell these assets in a vote that passed 417-8. Axios reported that more than a dozen yachts worth about $2.5 billion have been seized around the world.

Attorney General Merrick Garland said that the Justice Department would “support legislation that would allow some of that money to go directly to Ukraine.”

TRENDPOST: It should be noted that Denys Shmyhal, the Ukrainian prime minister, told the International Monetary Fund that it will take about $600 billion to rebuild the country after the war with Russia. As fate would have it, the Biden administration announced days after the invasion that the U.S. and Western allies seized more than $600 billion in Russian reserves.

Garland’s department launched a task force called the KleptoCapture Task Force after the 24 February with the mandate to target the assets of these oligarchs who have benefited from their relationship with Putin.

The House’s bill calls on Biden to take “any property or accounts subject to the jurisdiction of the United States, valued over $2 million and belonging to Russian energy companies or foreign persons whose wealth is derived in part through corruption only to or political support of the regime of Russian President Vladimir Putin,” according to RT.

Jonathan Turley, a professor at George Washington University Law School, wrote in USA Today that Western countries have "considerable authority to seize property, but less authority to keep it."

He wrote that the oligarchs will likely fight for these assets in court and the onus will be on prosecutors to show that "large corporations that have operated for decades in international markets are now deemed criminal enterprises for the purposes of these properties.

"It is not clear that governments now seizing the property will be able to establish the nexus between an alleged crime and these proceeds or property for some, if not most, of the oligarchs," he wrote.

Rep. Tom Malinowski, D-N.J., one of the designers of the bill, wrote that these assets should be “held, used, administered, liquidated, or sold,” and Ukrainians should benefit. Some of the money could also be used for the rebuilding effort in the country.

TRENDPOST: Earlier this year, Jude Andrew Napolitano spoke with Gerald Celente, the publisher of The Trends Journal, about the Biden administration’s decision to seize Russian yachts and the possibility that they would eventually be sold. Napolitano said academics told Biden that he did not have to give back the assets and he did not have to wait for a court’s ruling.

These academics told Biden to liquidate the assets and put the money into the Treasury Department because “they don’t believe in the right to property.”

“Their argument is that because a lot of these properties are owned by the Russian government, and the constitution only protects persons,” Napolitano said. “That’s hogwash. The constitution protects private property. All property is ultimately controlled by some human being.”