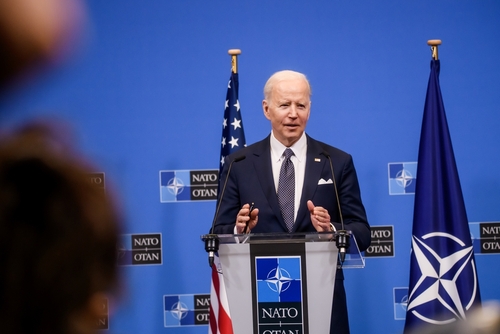 President Joe Biden said on Monday that the evidence emerging from Bucha, the Ukrainian city outside Kyiv where a mass grave was found, solidified his earlier claim that Russian President Vladimir Putin is a war criminal.

“He is a war criminal,” Biden said. “This guy is brutal, and what’s happening in Bucha is outrageous and everyone’s seen it. I think it is a war crime…He should be held accountable.” (See “POT CALLS KETTLE BLACK: BIDEN CALLS PUTIN A WAR CRIMINAL.”)

The scene in Bucha was tragic. Residents in the city told Reuters that these people were killed by Russian troops.

Reuters described the scene: “Bucha's still-unburied dead wore no uniforms. They were civilians with bikes, their stiff hands still gripping bags of shopping. Some had clearly been dead for many days, if not weeks.”

Germany and France moved to expel 75 diplomats and France called on additional sanctions against Russian coal and oil, The New York Times reported.

Jake Sullivan, Biden’s national security adviser, said the additional sanctions will be announced later this week, but promised that Russia will pay a “severe price.”

“We have communicated to them directly. We have coordinated with our allies and partners and I’m not going to go for the specifics here,” he said.

“The Russians have now realized that the West will not break,” Sullivan said, according to the Associated Press. And Russia also seems to have a high tolerance for economic pain and international opprobrium. Russian troops may be pulling back from cities like Kyiv, but could redouble efforts in the Donbas.

Sullivan was vague about where a war crimes tribunal against Putin would be held.

“Obviously, the ICC (International Criminal Court) is one venue where war crimes have been tried in the past, but there have been other examples,” Sullivan said. “So there’s work to be done to work out the specifics of that.”

Dmitri S. Peskov, the spokesman for Putin, denied Russia had any role in the atrocities. The Times accused Russia’s state media of airing “relentless conspiracy theories about what it said was a Ukrainian fabrication.” The paper also pointed out that Russia promised to prosecute anyone in the country who blamed Russia for the killings.

Zelensky visited the scene in Bucha and said, “Ukraine must have peace. We are in Europe in the 21st century. We will continue efforts diplomatically and militarily,” according to the paper.

TRENDPOST: The massacre in Bucha is another tragic example of why the Trends Journal is completely opposed to the Russian invasion of Ukraine and Western nations ramping up the war with lethal weaponry rather than demanding a ceasefire and peace talks.

Russia has been charged, found guilty and hung by the West and its media for the Bucha massacre, without anyone providing proof of their guilt.

Joe Lauria, the Editor-in-Chief of Consortium News, questioned the claim in a column he published on ConsortiumNews.com.  (See Featured Article by Guest Writer Joe Lauria, “Questions Abound About Bucha Massacre” in this Trends Journal issue.)  He pointed to how city leaders celebrated reentering the city, calling it a “glorious day.” He said that would be a hard claim to make if there were bodies littered in the street.

“It is possible that on Saturday the full extent of the horror had yet to emerge, and that even the mayor was unaware of it two days before, though photos now show many of the bodies out in the open on the streets of the town, something that presumably would be difficult to miss,” he wrote.

He pointed out that there was a possibility that the killings were carried out by the neo-Nazi Azov Battalion, that had been in the area. (See “UKRAINE’S AZOV BATTALION: ‘NAZI’S OR ‘FAR-RIGHT? DON’T CALL A SPADE A SPADE.”)

He wrote that the Bucha incident occurred at a critical moment in the war.

"An impartial investigation is warranted, which probably only the U.N. could conduct," he wrote. "The Azov Battalion may have perpetrated revenge killings against Russian collaborators, or the Russians carried out this massacre. A rush to judgment is dangerous, with irresponsible talk of the U.S. directly fighting Russia. But it is a rush to judgment that we are getting."

TRENDPOST: Dmitry Peskov, the Kremlin spokesman, said Monday that Russia wanted to discuss the Bucha allegations at a UN Security Council meeting, but was blocked by the U.K., RT reported.

“The situation is undeniably serious,” he said, according to the outlet. “We call on certain world leaders not to rush with false accusations and get their information from various sources and at least hear out our arguments.”

Dmitry Polyanskiy, Russia's deputy ambassador to the UN, took to Twitter Sunday to call for the meeting on Monday. The Moscow Times reported that a senior Washington official swiftly slammed the move, saying it was Moscow’s attempt to "feign outrage."

Mikhail Ulyanov, Russia's envoy to the Iran nuclear talks, tweeted, “The U.K. Presidency in the UN Security Council refused to convene an urgent open UNSC meeting on Monday to discuss without delay the tragic events in Bucha, as it was requested by Russia. Unprecedented! What are they afraid of?”