BIDEN SAYS AMERICANS ARE “REALLY, REALLY DOWN” AFTER ENDURING 2 YEARS WITH COVID-19 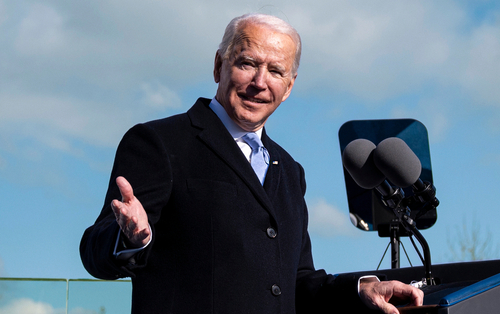 President Joe Biden said in an interview Thursday that Americans have had to endure two years of stress due to the COVID-19 outbreak and are feeling “really, really down” as a result.

“Their need for mental health in America has skyrocketed because people have seen everything upset,” he told The Associated Press in the interview. “Everything they've counted on upset. But most of it’s the consequence of what happened, what happened as a consequence of the COVID crisis.”

TRENDPOST: Biden failed to mention that the low morale felt by Americans is the result of ineffective COVID-19 mandates and lockdowns. The Trends Journal has reported extensively on how measures that were based on political science, and not actual science, led to economic hardship for millions of Americans.

Businesses were forced to close down or implement modified services due to policies put in place by Biden. (See “THE COVID-19 PANDEMIC IN A TIME OF MORAL AND SPIRITUAL BLACKOUT,” “DESANTIS FLIPS BIRD AT BIDEN” and “SWEDEN WINS COVID WAR. DEATH RATE AMONG LOWEST IN EU DESPITE REFUSAL TO IMPOSE DRACONIAN LOCKDOWNS.”)

Tomas J. Philipson, an economist at the University of Chicago, wrote in The Wall Street Journal in January that his university estimated that in 2020, about 80 percent of the total damage from COVID-19 “came from prevention efforts that hindered economic activity, and only 20 percent from the direct effects of the disease itself.”

A review and meta-analysis by Johns Hopkins researchers found that lockdowns had minimal impact on health, and were credited with reducing COVID-19 mortality by 0.2 percent.

“Now that he’s been president for a year and presided over so many COVID deaths himself, Mr. Biden surely understands how difficult it is to contain the spread of a highly contagious respiratory disease,” Philipson wrote. “He should make the reduction in total harm his administration’s objective now—and that includes the harm done by lockdowns, school closings and unproductive restrictions on economic activity.”

Biden told the AP that he does not believe that Americans will be forced to endure a recession as the central bank moves to increase interest rates and tighten monetary policy in an effort to get control of historic inflation.

“First of all, it's not inevitable,” Biden said. “Secondly, we’re in a stronger position than any nation in the world to overcome this inflation.”

He shook off the theory that his administration is responsible for the inflation numbers and he pointed to how essentially every country on earth is dealing with some level of inflationary pressures. His administration, of course, poured cheap money into the economy and then slapped Russia with sanctions that drove up commodity prices.

“Be confident because I am confident,” Biden said. “We're in a better position than any country in the world to own the second quarter of the 21st century.”

China is outmaneuvering the U.S. in every possible category. Beijing is getting closer with African and Latin American countries and its relations with Russia have never been stronger. The U.S., in the meantime, is fixated on keeping the old guard from the EU together to punish Russia for its war with Ukraine.

The AP’s report pointed out that Biden’s approval rating is at 39 percent and only about two in 10 Americans believe the country is headed in the right direction.

TREND FORECAST: As we have greatly detailed in the economic sections of our Trends Journal, the COVID War has inflicted unprecedented damage on the global economy.

Go back to 2020 when the COVID War was launched by China during its Lunar New Year—The Year of The Rat—when they locked down the city of Wuhan, followed by other cities to fight the coronavirus.

Italy was the first country to follow the Chinese Communists and the lockdowns spread throughout Europe and the U.S. Washington killed what used to be called the American Spirit: Life, Liberty and the Pursuit of Happiness.

Across the human spectrum—from suicide rates, violence, drug overdose, poverty, crime, and homelessness to business destruction—the COVID War’s damage is incalculable... far beyond the data supplied by the government-compliant media.

Inflation is skyrocketing, real wages are sinking, and millions of businesses have gone under.

Hardly mentioned is the pending commercial office real estate disaster that will be the direct result of the phony political science that was used to “flatten the curve.” Businesses were forced to close and workers were told to work from home... a trend that is now part of the New ABnormal.

There's been barely a word about the death of nightlife in much of America. Bars that were once standing room only were forced to close and never reopened. And many that have, as with restaurants and across the hospitality sector, are doing much less business than before the COVID War.

The “how we got here” that was the beginning of “The End” of Empire America began at the start of the 21st century.