BIDEN KEEPS WAR DRUMS BEATING, ANNOUNCES ANOTHER $1B IN WEAPONS FOR UKRAINE 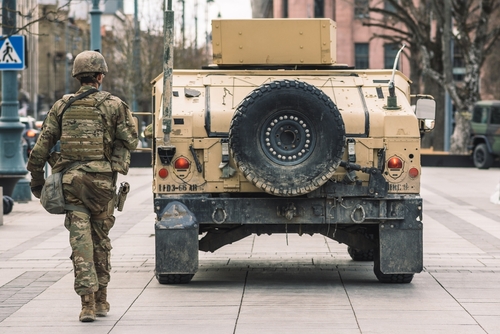 President Joe Biden on Wednesday announced $1 billion in new military aid for Ukraine that will pay for heavy weapons including advanced rockets, new rounds for howitzers, and anti-ship systems.

The weapons are expected to arrive in Ukraine within the next few months. The U.S. has given Ukraine over $5.6 billion in military aid since the war started on 24 February. The U.S. also provided Ukraine with $40 billion in new funding to support the economic crisis in Ukraine.

Biden told reporters that he had a phone conversation with Ukrainian President Volodymyr Zelensky before the announcement. The Pentagon issued a statement that said the latest round of support will provide Ukraine with 18 howitzers, 36,000 rounds of ammunition for the howitzers, and two Harpoon coastal defense systems.

Ukraine has said it needs more advanced rocket systems than the U.S. has promised if it stands a chance against Russia in the eastern flank of Ukraine.

“If we get 60 of these systems then the Russians will lose all ability to advance anywhere, they will be stopped dead in their tracks,” Oleksiy Arestovych, an advisor to Zelensky, said. “If we get 40 they will advance, albeit very slowly with heavy casualties; with 20 they will continue to advance with higher casualties than now.”

Reports said the amount of weapons is still short of what Kyiv has requested. The New York Times reported that Dmytro Kuleba, the Ukrainian foreign minister, told Secretary of State Antony Blinken that he was grateful for the weapons, but needed more heavy weapons and faster. (See “WEAPONS POURING IN TO UKRAINE, NO TALK OF PEACE, JUST MORE WEAPONS” and “WARMONGERS ON PARADE: WEST SENDS MORE WEAPONS TO UKRAINE TO KEEP THE KILLINGS GOING.”)

Defense Secretary Lloyd Austin, who was in Brussels at the time of Biden's announcement, said other countries also agreed to send additional military aid.

Germany will send three Multiple Launch Rocket Systems, which are similar to the HIMARS, and guided munitions. Slovakia will send helicopters and rocket ammunition. Canada and Poland will send artillery.

“We remain focused on Ukraine's needs,” Austin said. “We’ll stay focused on it for as long as it takes.”

Gen. Mark Milley, chair of the Joint Chiefs of Staff, said the U.S. will also send Ukraine HIMARS with Ukrainian crews capable of using the heavy weapons. Milley said the missile system is not “a silver bullet,” but if used correctly, it will make a difference on the battlefield, Politico reported.

Most of the recent fighting has been in the Donbas and Milley said it is obvious that Russia has the upper hand due to its artillery superiority. Milley said about three-quarters of Severodonetsk, a city in the Donbas region, were in Russian control, "but the Ukrainians are fighting them street-by-street, house-by-house, and it's not a done deal."

While a Russian win in the Donbas is not “an inevitability,” Milley noted that “the numbers clearly favor the Russians. In terms of artillery, in terms of the numbers, they outgun and outrange.”

Milley said Ukraine’s estimate that is losing about 100 troops a day seems about right, and he said Russians have lost about 30 percent of their armed forces due to the conflict.

Biden said the U.S. remains committed "to supporting the Ukrainian people whose lives have been ripped apart by this war."

He also announced that the U.S. will also send an additional $225 million in humanitarian aid to Ukraine to provide assistance for drinking water, food and shelter.

TRENDPOST: The Trends Journal has noted that the longer the war in Ukraine drags on the more people will die, the more infrastructure will be badly damaged, and the closer the world inches to fighting WWIII.

Ukraine's position has been that they will make no concessions and they will take back every inch of ground taken over by Russian forces. Any mention of concessions has been swiftly rebuffed by Kyiv.

Dmitry Medvedev, the deputy chair of Russia’s Security Council who has been vocal since the invasion, is now indicating that his forces will not stop the assault until Ukraine is no longer a country.

He posted on Telegram that he heard that Kyiv has ambitions to receive liquefied natural gas from its “overseas masters” with payment due in two years, The Associated Press reported.

“But there’s a question: Who said that in two years, Ukraine will even exist on the map?” he said.

TRENDPOST: As we have noted before the Ukraine War began, totally absent in the political and media worlds was—or is—a peep about peace talks.

Instead, billions of military weapons are being poured into Ukraine by the U.S. and NATO that will kill more people and economic sanctions that are mutually assured to impose hardship on citizens of Europe and the United States.

And, the Biden administration had failed to find a diplomatic solution with Russia when Moscow submitted its list of demands about NATO expansion and its relationship with Ukraine. (See “WASHINGTON AND NATO: NO CONCESSIONS TO RUSSIA.”)

When the White House announced a ban on Russian oil imports, joining Canada and the United Kingdom back in March, oil prices in the U.S. hit $130 per barrel, their highest levels since 2008.

Yet, there was little or no denunciation for this moronic statement, since gas prices were rising before the Ukraine War, and Biden, by his own admission, had made a bad situation worse.

TREND FORECAST: As we noted three weeks before Russia’s invasion of Ukraine, with petroleum exports accounting for about half of Russia’s annual budget, and with Russia back then providing Europe with more than 40 percent of its natural gas supply, it would be a lose, lose situation for the EU to keep putting sanctions on Russia, which will in turn shut off its gas flow to Europe.