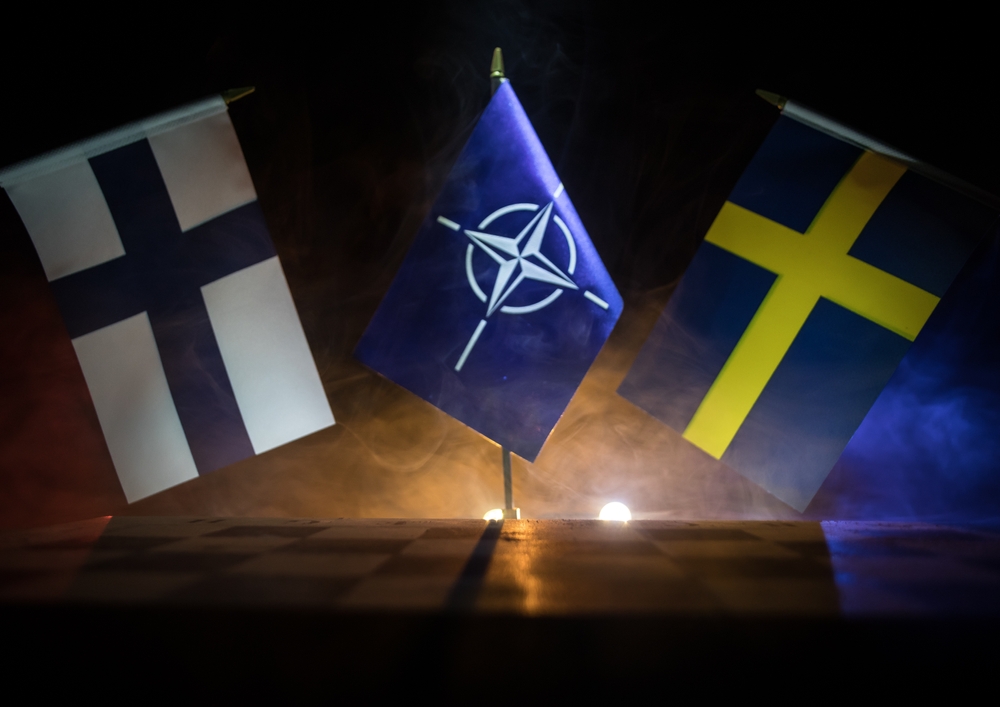 President Joe Biden, the Vietnam draft dodger who has pushed for every war America has fought since, declared Thursday that the U.S. will defend Finland and Sweden while their NATO application is considered, saying these countries have the same security concerns as the U.S.

Biden's vow comes about a week after British Prime Minister Boris Johnson made a similar promise. Both Biden and Johnson have been two of Ukraine's most vocal supporters. (See “U.K.’S JOHNSON PROMISES MORE WEAPONS OF DEATH TO KEEP BLOODYING THE UKRAINE KILLING FIELDS” and “BAD BOY BORIS GOES ‘LETHAL.’”)

Biden said he promised Finnish President Sauli Niinistö and Swedish Prime Minister Magdalena Andersson that the U.S. would “remain vigilant against the threats to our shared security and theater and confront any aggression while Finland and Sweden are in this accession process,” the Financial Times reported. “There’s nothing that's going to be missed, as my mother would say, between the cup and the lip.”

Biden has been an enthusiastic supporter of Sweden and Finland's bid for NATO because he said it will give the alliance a strong presence in the “high north.” He said both militaries are capable, their economies are transparent, and both have a “strong moral sense of what is right.”

Sweden and Finland's bid for NATO is no sure thing. Turkey has said it will deny their application due to their ties with terror organizations. Turkey has accused the countries of hosting militants from the Kurdistan Workers' Party (PKK).

Turkey's refusal could mean Sweden and Finland could be locked out of the alliance because all 29 NATO members need to vote in favor of applications for a country to join.

Jens Stoltenberg, the NATO secretary-general, also said he was ”confident that we will come to a quick decision to welcome both Sweden and Finland to join the NATO family.”

“We are addressing the concerns that Turkey has expressed, because when an important ally (like) Turkey raises security concerns, raises issues, then of course the only way to deal with that is to sit down and find common ground,” Stoltenberg said, according to The Associated Press.

TRENDPOST: President Joe Biden told reporters at the White House, with a straight face, that "new members joining NATO is not a threat to any nation."

The Trends Journal has long pointed out that Russia invaded Ukraine after its security demands were not met by Western countries. Moscow wanted assurances that Ukraine would not become a full member of the alliance. Russian President Vladimir Putin has said he sees NATO expansion east as a direct threat to Russia’s security.

Oddly enough, it has been Putin who has shown a willingness to take a diplomatic route. After weeks of tough talk from the Kremlin about drastic actions it could take if Finland and Sweden were to join the alliance, Putin announced that he is fine with the membership as long as the alliance does not install bases in the countries.

TRENDPOST: As NATO’s first secretary-general put it, NATO was formed in order to keep the Russians out of Western Europe and the Americans in.

Instead of disbanding NATO when the Soviet Union collapsed in 1991, Washington dramatically expanded NATO.

Long forgotten was the U.S. and NATO’S pledge not to expand into Eastern Europe following the deal made during the 1990 negotiations between the West and the Soviet Union over German reunification.