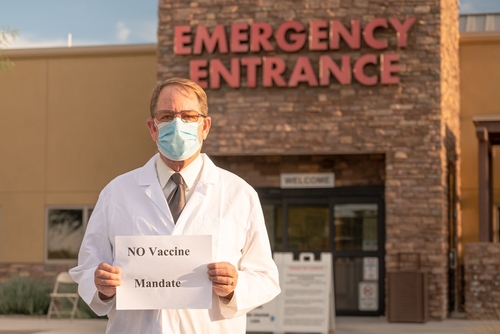 As court rulings take the wind out of the sails of the Biden administration's vaccine mandates—see "BIDEN VAX MANDATE CONTESTED" (9 Nov 2021) and "COURT BLOCKS BIDEN VACCINE MANDATE" (16 Nov 2021) —a number of hospitals have decided that they'd been shanghaied on board and are now choosing to jump ship.

The Biden administration's directive aimed to compel all health facilities that receive Medicare or Medicaid funds to require their workers to be vaccinated, under pain of penalties and loss of funding for non-compliance. It was announced on the same day as the directive that private employers of 100 or more workers also require vaccination of all workers. In both cases, non-compliant workers faced termination.

UPDATE: A federal appeals court panel on 17 December reversed a previous decision by another court, thereby allowing the Biden vax mandate for private employers to proceed. The mandate for healthcare facilities remains stalled by legal challenges.

The Biden hospital mandate would have applied to some 17 million workers at some 76,000 facilities around the country. But now the Washington Post reports, on 12 December, that a number of hospital groups, including AdventHealth, the Cleveland Clinic, Tenet Healthcare and HCA Healthcare, which together account for more than 300 hospitals and half-a-million employees, have decided to drop the requirements.

The American Hospital Association says that such changes are merely anecdotal, and that most hospitals are still going along with the mandate, although it does acknowledge that some have decided not to terminate unvaxxed workers.

Although the healthcare industry has, according to the Centers for Disease Control and Prevention, been hit hard by COVID-19, with many workers falling ill and over 3000 deaths, it's also been affected by the labor shortage and can ill afford to lose more workers; see "SPOTLIGHT: WORKERS ON DEMAND" (26 Oct 2021).

Hospitals in rural areas in particular are challenged by lower vaccination rates and find it more difficult to replace workers; the National Rural Health Association says its members' reluctance to enforce vaccine mandates have been fueled by fears of losing too many workers, making it impossible for them to operate.

While physicians tend to have a high vaccination rate, the same cannot be said for nurses, support staff, and EMS workers. And, in many cases, such workers react to vaccine mandates by seeking work in other facilities where mandates are not enforced, even at the cost of more strenuous workloads and commutes.

TREND FORECAST: The death of what used to be called “Journalism” is front and center.

This past Sunday, President Trump, speaking at an event in Dallas, Texas was booed when he said he got the COVID booster shot. In an interview with The Wall Street Journal in September, the former president said he was “in good shape from that standpoint" and "probably won't" get the booster.

We note this because the Presstitutes from the Cartoon News Network, CNN, commenting on the crowd’s displeasure of Trump getting the booster said it was typical of Trump supporters since “... this speaks of the exact problem here, with which Americans, to a large degree, are still very resistant to getting these booster or the vaccines in the first place.”

Following this statement, the Presstitue’s colleague commented, “Hopefully his supporters let it sink in and go get boosted or go get that first vaccine now that they know the former President  ... didn’t sound like it there, they like to resist.”

This is not journalism, it is selling an agenda.

First, they blame Trump supporters as those in America who do not want to get the jab, while ignoring all the health care workers and others who refuse to get the Operation Warp Speed vaccine because of religious or other reasons that have nothing to do with political beliefs.

The media clowns also totally ignore the massive protests raging across Europe of the hundreds of thousands of people who are clearly not Trump supporters that are refusing the jab and taking to the streets.

Secondly, it is clearly not “journalism” when you have an arrogant Pressstitute telling the people to go out and get vaxxed and get booster shots. But, considering all the drug ads CNN runs daily, the media whores were putting out for their corporate whore masters.

TRENDPOST: Again, as we note in this article, health care workers have seen the negative effects of vaccines and they are not Trump supporters.