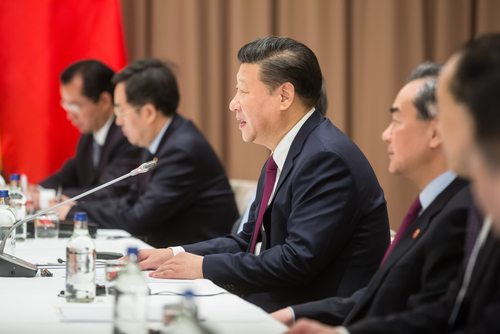 China tried to distance itself from the Ukraine War last week during tense discussions with the U.S. about a wide range of topics, from Russian sanctions to Taiwan.

Ned Price, a spokesman for the state department, told reporters that the U.S. made clear that it will “not allow any country to compensate Russia for its losses” from Western sanctions.

The White House did not go into specifics about what the consequences would look like. Jen Psaki, the White House press secretary, said these discussions will not play out “through the media.”

Western countries have imposed crushing sanctions on Russian companies, oil, and banks. The country is expected to face a deep recession as a result. Reports indicate that Moscow asked Beijing for both military and economic assistance, a claim they both deny.

Secretary of State Antony Blinken said Thursday that the administration is concerned that Beijing is “considering directly assisting Russia with military assistance to use in Ukraine.” China accused the U.S. of spreading false information.

Chinese Foreign Minister Wang Yi said Beijing stands on the right side of history over the Ukraine crisis and “will never accept any external coercion or pressure, and opposes any unfounded accusations and suspicions against China."

All Eyes on China

Beijing may insist that it wants nothing to do with the war in Ukraine, but its moves are being closely watched. Russia’s invasion occurred shortly after the completion of the 2022 Winter Olympics and a high-profile meeting between Chinese President Xi Jinping and Russian President Vladimir Putin. Some observers believe Xi was aware of the Ukraine invasion after the meeting.

The West is concerned that an alliance is emerging between Russia and China and that Beijing would help prop up the Russian economy.

Russia sees China as an economic lifeline. China is Russia’s top trade partner with total trade last year jumping 35.9 percent to a record $146.9 billion, according to Reuters. The report said trade between the two countries jumped 50 percent after the 2014 annexation of Crimea.

(See “WAR IN UKRAINE ECONOMIC OVERVIEW,” “CHINA SIDES WITH RUSSIA IN CLASH WITH WEST. WILL THEM BOTTOM LINE LIMIT SUPPORT?” and “CHINA CALLS FOR RESTRAINT IN UKRAINE, BLAMES WEST FOR CALAMITY.”)

Jens Stoltenberg, the head of NATO, said China should “clearly condemn” Russia over its invasion, saying the country has “an obligation as a member of the UN Security Council to support and uphold international law, and the Russian invasion of Ukraine is a blatant violation of international law.”

Evan Medeiros, a professor at Georgetown University who served on the U.S. National Security Council staff from 2009-2015, wrote in the FT that China’s “ultimate position on the conflict—either to maintain its support for Russia, or to re-embrace the geopolitics of stability, growth and integration—will eventually define the world order.”

“Chinese officials are reportedly telling European diplomats in Beijing: “You have lost Russia, you can’t lose China, too.”

Europe should reply that if China has lost the U.S. and is shackled to Russia, then it can’t afford to lose Europe as well,” he wrote.

Biden and Xi had a “direct,” two-hour call on Friday about the situation unfolding in Ukraine. A senior White House official told reporters that the two “spent the preponderance of their time discussing Russia’s unprovoked and unjustified invasion of Ukraine.”

After the phone call, Xi said the Ukraine crisis is “something we don’t want to see.”

The Global Times, the tabloid under the auspices of the Chinese Communist Party's flagship newspaper, the People's Daily, wrote that NATO's eastward expansion is "the root cause of Russia's anger and military operation in Ukraine."

"It's the US that should put out the fire it lit in Ukraine. Ridiculously, it is demanding Beijing to do this job at the cost of damaging China-Russia relations. This is unreasonable and insidious. By pushing China to denounce Russia and asking China to bear the responsibility for the fatal strategic mistake the US and NATO made in the construction of so-called European security, Washington has no intention of hiding its desire to sow discord between China and Russia," the paper wrote.

TRENDPOST: The Trends Journal has long said that the business of America is war, and the business of China is business. China has not condemned Russia, but it also did not give the invasion its full-throated support – and has called on a diplomatic solution. (See “CHINA CALLS FOR RESTRAINT IN UKRAINE, BLAMES WEST FOR CALAMITY.”)

President Xi Jinping reportedly called for a “cool headed” approach to solving the crisis that threatens WWIII. He also told President Joe Biden that the U.S. and China “must shoulder our share of international responsibilities and work for world peace and tranquility,” the Financial Times reported.

U.S. Secretary of State Antony Blinken, who refused to meet any of Russia’s key demands prior to the war, has been working to pressure China to avoid propping up the Russian economy.

As usual, the U.S. took a bellicose position. He said Biden would “make clear that China will bear responsibility for any actions it takes to support Russia’s aggression, and we will not hesitate to impose costs.”

The U.S. believes it is the only country that has the authority to inflict economic harm on a country. This is another empty threat from the Biden administration that abandoned Afghanistan after failed diplomacy, was vague with its support for Ukraine, and remains confused about its own policy on Taiwan. (See “CHINA WON’T STOP AT TAIWAN, SO WHERE SHOULD AMERICA DRAW THE LINE?”)

The Trends Journal has reported extensively on how the U.S. military, the largest in the world, has not won a war since World War II and cannot even win against third-world nations, such as Afghanistan. The U.S. cannot defeat Russia or China, so regardless of all the bluster from the AUKUS deal last year, Taipei is there for Beijing’s taking.

“Some individuals in the United States are sending the wrong signals to pro-independence forces in Taiwan, and that’s very dangerous,” Xi told Biden on Friday, according to Al Jazeera. “If the Taiwan issue is not handled properly, it will have a subversive impact on the relationship between the two countries.”