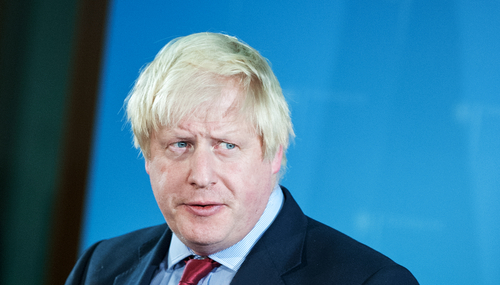 What a difference a war makes. Remember back in January, the clown playing Prime Minister of the U.K., Boris Johnson, had been under fire over a leaked video that showed him and his aides last year mocking their COVID War mandates they imposed on the population while they were partying? (See “COVID WAR CRACKDOWNS AND PROTESTS.”)

Since then, Johnson faced new calls to resign over allegations of even more parties at 10 Downing Street while the rest of the U.K. was under lockdown.

Johnson apologized last week and admitted that he attended a “bring your own booze” party. (See “ANOTHER COVID FRAUDSTER CAUGHT.”)

But now, with the COVID War winding down and the Ukraine War heating up, the pressure for Johnson to resign and the massive criticism for his behavior has been overshadowed by his new role playing the mastermind in the fight against Russia.

Last week Johnson told his cabinet that he would like to begin providing Kyiv with “more lethal” firepower in its fight against the Russian invasion.

Johnson and his staff have been outspoken critics of Russian President Vladimir Putin and mentioned new sanctions, telling reporters that he will do “everything in my power to starve Putin’s war machine.”

“We are stepping up our sanctions and military support, as well as bolstering our humanitarian support package to help those in need on the ground,” he said.

The Times of London reported that Johnson urged his cabinet to approve the more lethal aid after warning that Putin would try to “twist the knife.”

Admiral Sir Tony Radakin, chief of defense staff, reportedly told his inner circle that the conflict in Ukraine is now taking on the appearance of “more traditional warfare.” He said Ukrainians are now holding their ground and attempting to retake territory.

The U.K. has supported the Ukrainian military since the 2014 invasion and trained over 20,000 Ukrainian troops, according to its military website. This year, the U.K. provided Ukraine with 4,000 NLAWs and Javelin anti-tank systems and promised to send Starstreak air defense systems and 6,000 new anti-tank and high explosive missiles.

Reports did not indicate what specific weapons Johnson had in mind, but one source told the paper Kyiv needs “longer-range deep fires.”

Johnson was reportedly impressed with the Turkish-made Bayraktar drones and urged the U.S. to provide anti-ship missiles.

He said the U.K. will continue to intensify sanctions until "every single one of these troops is out of Ukraine,” Johnson said.

Johnson was asked about French President Emmanuel Macron’s effort to negotiate with Putin which drew some criticism in Europe. Polish Prime Minister Mateusz Morawiecki addressed Macron at a press conference, asking him how many times he negotiated with Putin and what he has to show for it.

Johnson said he believes that Russia has no say in Ukraine’s future and that “whatever happens should be what the Ukrainians want and it’s for them to decide what their future should be.”

Doubling down on his call for more military weapons for Ukraine, last Thursday British Defense Minister Ben Wallace said “There’ll be more lethal aid going into Ukraine,” and “a number of countries have come forward with new ideas” around increasing arm shipments to Kiev.

TREND FORECAST: While the U.K. champions “more lethal” weapons, never is there a call for peace or a rebuke of ramping up war... nor a condemnation of lethality: the capacity to cause death or serious harm or damage. No, instead, lethal is praised and more death and destruction is the call to arms.

Therefore, considering the joyous sound of war drums that is reverberating across Western nations, as we have stated, WWIII has begun.