AUSTRIA: “NO VAX, NO FREEDOM” 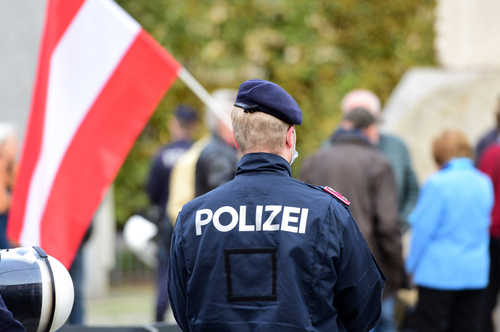 Since the beginning of the COVID-19 War, so-called “government health officials” have done their best at dividing populations into two groups: those who obey what politicians and bureaucrats tell them, and those who think for themselves. And as last week’s cover of the Trends Journal noted: “Think for Yourself! It’s not illegal ...yet!”

That “yet” has come and gone in Austria.

Starting with Israel, which was the first nation to issue vaccine passports, countries have been imposing draconian dictates to force mass vaccination rates.  (See “ISRAEL: NO VACCINE, NO GREEN PASSPORT,” 23 Feb 2021). Now, Austria has enforced a series of strict COVID-19 Green Passport mandates. Millions in the country who have not been vaccinated face a mandatory lockdown.

"We are not taking this step lightly but it is necessary," Chancellor Alexander Schallenberg said.


About two million people in the country of nearly nine million are now only allowed to leave their homes for reasons that are essential to life. The unvaxxed will be permitted to go to work, grocery shopping or visiting a doctor, said Schallenberg, and they will also be allowed outside their homes to “stretch their legs.”


Vienna announced entry bans for the unvaccinated, “effectively barring them from public life, including at bars, restaurants, cafes, theaters, hotels and—significantly in the Alpine nation—ski lodges.”

The COVID COPs will patrol the streets and search pedestrians for their vax passports. Those who break the “no vax, no freedom” dictates will be fined up to 1.450 euros ($1,660).


The vax push followed a report that about 65 percent of the Austrian population has been fully vaccinated, which is lagging behind countries like Germany, which has inoculated 67 percent of its population. Vienna’s vaccination rate is among the lowest in Western Europe. Schallenberg called the number “shameful."

All health care workers in the country will be required to take the shot.


Taking to the Streets

Tens of thousands of Austrians took to the streets to protest the new lockdown. Protestors claimed that the national broadcaster is lying over the COVID-19 data and publishing bogus reports over the compulsory vaccination, according to Republicworld.com.

Videos emerged on social media that showed protesters holding banners that read, "Whoever controls the media controls the minds."


Schallenberg was asked about the lockdown and he said that he did not see why “two-thirds should lose their freedom because one-third is dithering."

"For me, it is clear that there should be no lockdown for the vaccinated out of solidarity for the unvaccinated,” he said.

Chiming in the push to get more people vaxxed—and instituting a new set of lockdown rules last week to coerce more people to get the jab—the prime minister of Netherlands, Mark Rutte bellowed, “The virus is everywhere and needs to be combated everywhere.”

TRENDPOST: There are a number of reasons why so many are hesitant to get the COVID Jab. One is that they were rushed along under a project called “Operation Warp Speed.” Another is the fact that the disease is entirely survivable by most of the people it infects, and those who die from it are suffering from pre-existing comorbidities and/or the elderly, who are suffering from illnesses.

TRENDPOST: Since the COVID War broke out nearly two years ago, 11,747 out of 9 million Austrians have died of the virus... or just 0.1305 percent of the population. And, as with all European nations, the majority of those who died of the virus are above 70 years of age.

TRENDPOST: The “responsible ones” are embraced. The line being sold is those who cared about grandma since the beginning of the virus outbreak wore masks and then got vaccinated because. Why? We have been told (lied to?) that's the best way to protect others and yourself. (See “ANTHONY FAUCI’S UNSCIENTIFIC MANIFESTO” and “THE COVID-19 PANDEMIC IN A TIME OF MORAL AND SPIRITUAL BLACKOUT.”