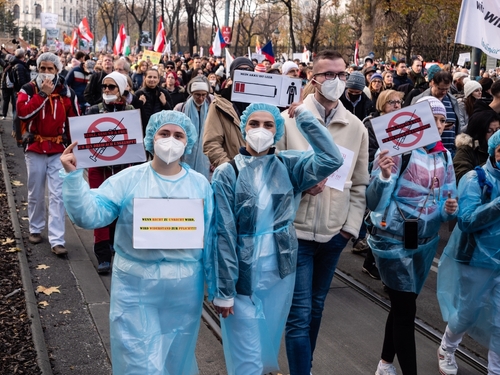 Happy Days are here again in Adolph Hitler’s homeland. The leaders of Austria have declared that as of Saturday, all citizens over 18 must either be injected with the Operation War Speed COVID Jab or face a fine after Commander-in-Chief, President Alexander Van der Bellen, signed the Compulsory Vaccination Act into law.

The country has made any semblance of a normal social life for unvaccinated individuals nearly impossible and has excluded the sizable minority from restaurants and other indoor venues.

The Financial Times reported that the country's leadership finds itself in an awkward position. While neighboring countries are relaxing their mandates, Vienna is imposing its toughest mandate yet.

“The government is really stumbling around and I think a lot of people perceive that,” Thomas Hofer, a Vienna-based political consultant, told the FT. “Polls show a majority are still in favor of the new law, but it’s hard to see how that doesn’t fall.”

German Chancellor Olaf Scholz is also reportedly pushing for a vaccine mandate that is expected by the end of the month. Denmark, where 81.5 percent of the population received two shots, announced that it will lift restrictions despite a surge in cases, according to CNN.

“At the same time as infections are skyrocketing, [the number of] patients admitted to intensive care [is] actually down,” Søren Brostrøm, the director-general of Denmark's Health Authority, told CNN. “It’s around 30 people in ICU beds right now with a COVID-19 diagnosis, out of a population of 6 million.”

About 100,000 people in Switzerland signed a referendum to prevent the Swiss government from approving compulsory vaccinations.

The law in Vienna applies to all adults, except for pregnant women and those who have medical exemptions. The country has seen massive protests in opposition to the mandate, which was first announced in November.

The country of 9 million has had more than 14,000 COVID-related deaths and 2 million cases. The Agence France-Presse (AFP) pointed out that mandatory vaccinations are rare but Ecuador, Tajikistan, Turkmenistan, Indonesia, and Micronesia have all introduced such measures. Italy has mandated the vaccine for those over 50 and workers in the medical industry.

Austrian police will start to check for the vaccination status of individuals on the street and during traffic stops, Bloomberg reported. The report pointed out how many European countries are looking for life past coronavirus. Denmark, for example, reclassified COVID-19 as no longer a threat to society.

TRENDPOST: The vaccine checks will start in March and the unvaccinated will face fines up to $4,100 each year. France 24 reported that more than 60 percent of the country is in favor of the mandate.

What is being imposed upon civilian populations is unprecedented in modern history: (See “AUSTRIA ENDING LOCKDOWN MANDATES, RESTRICTIONS AND FINES FOR UNVAXXED,” “AUSTRIA: IT’S THE LAW. NO JAB, NO FREEDOM” and “ANTI-LOCKDOWN FIGHTERS GRAB SEATS IN AUSTRIA’S REGIONAL PARLIAMENT, AS PREDICTED BY TRENDS JOURNAL.”)

TREND FORECAST: We maintain our forecast that the stricter the COVID War mandates that are imposed, the stronger and faster the formation of anti-vax, anti-establishment, anti-tax political movements.

And when equity markets crash and the world sinks into deep economic decline, these movements will gain formidable strength.

But again, as socioeconomic conditions deteriorate and civil unrest and government protests escalate, as Gerald Celente notes, and as the cover of last week’s Trends Journal illustrates: “When all else fails, they take you to war.”