AUSTRIA: IT’S THE LAW. NO JAB, NO FREEDOM 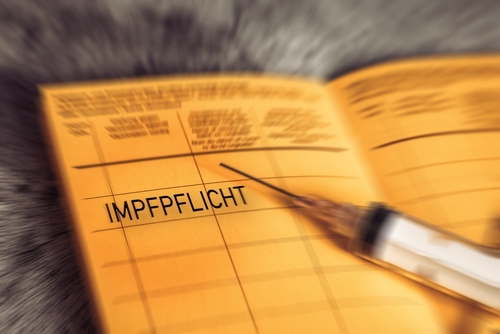 Austria’s parliament on Thursday voted overwhelmingly in favor of the country’s controversial vaccine mandate for all adults, which will be the first of its kind in Europe and will likely pave the way for other countries in the European Union to follow.

“This is how we can manage to escape the cycle of opening and closing, of lockdowns,” Wolfgang Mueckstein, the country's health minister, told parliament prior to the vote. He said the vaccinations will help combat the spread of Omicron and will also give the population a level of protection for new variants that are bound to emerge. “That is why this law is so urgently needed right now.”

About 72 percent of Austria’s population has been fully vaccinated. The new law will include fines up to €3,600 for adults who are not vaccinated. There will be some exceptions to the rule, including women who are pregnant. Parliament’s vote is the first step in the process for full approval.

The bill will now head to the body’s upper house and eventually President Alexander Van der Bellen’s desk for his signature. The bill is expected to pass easily.

Karl Nehammer, the chancellor, said the mandatory vaccination is an “opportunity for our society to achieve lasting and continuous freedom, because the virus cannot restrict us any further.”

Austrians will be receiving letters in the mail about the new policy in March and police will then randomly check people on the street. Those who cannot produce a proof of vaccination will receive a written invitation to take a jab and get fined if they do not.

Vienna will then decide if it will reach out again to an individual who paid the fine to urge them to get vaccinated. At which point, they would face another fine. The vaccine mandate is expected to stay in place until January 2024.

The bill has been contentious and sparked large protests in major cities. Herbert Kickl, the leader of the “far-right” Freedom Party, said the mandate “paves the way to totalitarianism in Austria.” He promised to continue refusing the jab even after the law takes effect, the BBC reported.

The report also pointed out that German Chancellor Olaf Scholz announced that he will introduce a vaccination bill in March. Italy has also made the vaccine mandatory for citizens older than 60.

TREND FORECAST: We maintain our forecast that the stricter the COVID War mandates that are imposed, the stronger and faster the formation of anti-vax, anti-establishment, anti-tax political movements. And when equity markets crash and the world sinks into deep economic decline, these movements will gain formidable strength.

But again, as socioeconomic conditions deteriorate and civil unrest and government protests escalate, as Gerald Celente notes, and as the cover of this week’s Trends Journal illustrates: “When all else fails, they take you to war.”

TRENDPOST: There are a number of reasons why so many are hesitant to get the COVID Jab. One is that they were rushed along under a project called “Operation Warp Speed.” Another is the fact that the disease is entirely survivable by most of the people it infects, and those who die from it are suffering from pre-existing comorbidities and/or the elderly, who are suffering from illnesses.

TRENDPOST: Governments and its paid bureaucrat health official flunkies have faced the daunting task of trying to get people to sign up for the unproven gene therapy inoculation—the first ever injected in the human body—that does not prevent infection or the transmission of the disease from a vaccinated individual.

Countries don’t even mind that vaccines have little efficacy against the dominant Omicron variant. (See “PROTESTS BREAK OUT IN VIENNA OVER VACCINE MANDATE,” “NO VAX, NO FREEDOM” and “SOUTH AMERICA: JAB OR NATURAL IMMUNITY SLOWING THE COVID SURGE.”

A recent study from the U.S. Centers for Disease Control and Prevention found that natural immunity was far more efficient in protecting against the spread of the earlier Delta variant.

The study, which was published in the Morbidity and Mortality Weekly Report, found that those who were unvaccinated and recovered from the virus were better protected against the Delta variant than those who were considered fully vaccinated.