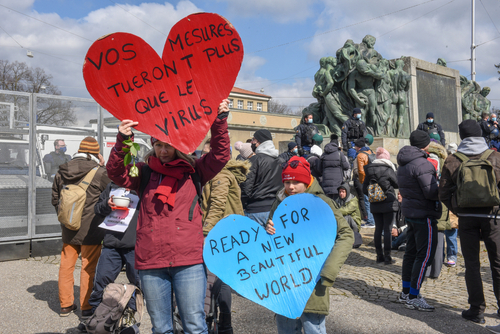 For some three months, tens of thousands in Switzerland have been protesting against the COVID Laws that have robbed those who refuse to get injected with the Operation Warp Speed gene therapy jab of freedom... but the demonstrations have been banned or barely covered by the mainstream media.

Ringing bells and chanting “Freedom,” this past Saturday thousands took to the streets in Bern Lausanne, and other parts of Switzerland to protest the COVID passports that are compulsory to gain access to any public space.

In this nation of Direct Democracy where the people have the right to vote on major issues that affect them, in a few days its citizens will be voting on a referendum in favor of or against the COVID certificates.

“I’ve come to the conclusion that the only solution is to take that control from the handful of ‘them’—the power possessors and power brokers—and put the power into the hands of the people. But how?”

Back in 2011, he proposed the “Celente Solution of Direct Democracy”: a potentially globe-changing movement that would replace today’s “representative democracy.”

As clear by their deeds and actions, politicians are representative of their interests and to those special interests that give them money.

Celente said, "Positive change will not and cannot occur until power is taken away from the power-obsessed."

The “Direct Democracy” solution he proposes “… will not only transfer power to the public (for better or for worse!), it will make ‘we the people’ fully responsible for creating the future.

“The choice is stark. Either we take action to create our destiny or others will continue to create it for us. And, judging by past performance, we’re not going to like what they create.”

As the anti-establishment trend intensifies and citizens lose faith in political parties and systems, they will seek the Direct Democracy option that puts the future in their hands.