ANOTHER INDUSTRY BITES THE DUST 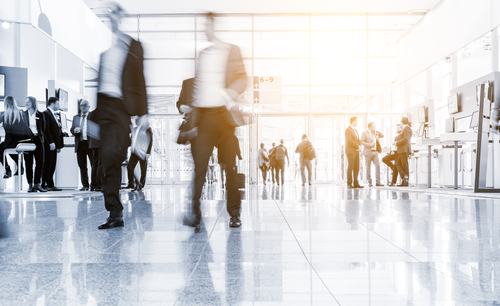 One early casualty of the COVID War is an industry that's been devastated: the expo and convention industry. All manner of gatherings, such as conventions, trade shows, state and county fairs, exhibitions etc. have been canceled, cut back or otherwise curtailed; many livelihoods that depended on such events have been ruined, not just in the U.S. but worldwide; see "VIRUS VICTIMS: TOURISM, TRADE SHOWS, THEATERS, SPECIAL EVENTS" (10 Mar 2020) and "U.K. EVENTS INDUSTRY DYING" (14 Jul 2020).

One such event is the annual healthcare conference conducted by JPMorgan Chase & Co., one of the biggest events for healthcare professionals worldwide; this year's conference—the 40th in the event's history—had been scheduled to take place in mid-January in San Francisco and would have drawn hundreds of exhibitors and thousands of attendees.

But the attendees will not be traveling to San Francisco, because the event will now be conducted only virtually.

The Wall Street Journal reports, on 16 December, that plans to hold the event in person had been changed, after several bio-technology companies announced cancellation of their planned and previously announced appearances.

Reasons cited included the headline-grabbing crime wave going on in San Francisco—see "COVID CRIME WAVE SPIKES, DRUG STORES CLOSE" (19 Oct 2021)—but COVID-19 was more of a factor, especially with participants voicing concern over the industry "setting a bad example" by holding such a large in-person event in the midst of a surge in COVID cases, particularly the Omicron variant, which appeared just when such events were poised to make a comeback. Many participants expressed the need to avoid a repeat of the 2020 Biogen Inc. meeting in Boston that had resulted in thousands of COVID cases in attendees from around the world.

TREND FORECAST: The fallout from formerly big, well-attended in-person events now going virtual is far-reaching, impacting far more than those directly involved in the events. Hotels and restaurants suffer, as do travel-related businesses and all those local businesses that would have been patronized by the influx of visitors to the host city; tax revenues are lost as well.

Any business that depends on crowds, right down to the guy who sells hot dogs outside the exhibit hall, takes a hit as such venues become ghost towns, and some will never recover.

Another industry set up to suffer (and perhaps never recover) is commercial real estate, as so many functions that once required offices now no longer do, replaced by Zoom meetings and virtual conferences; see "FACEBOOK WORLD 2021: AN ARTIFICIAL REALITY THAT WILL DESTROY THE HUMAN SPIRIT AND COMMERCIAL REAL ESTATE" (2 Nov 2021).