AND WHAT ABOUT THOSE BIOLABS? 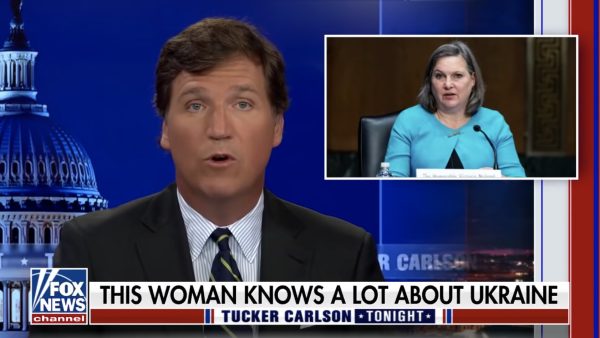 Stop the narrative I want to get off!

The semi-official United States government plus media lie machine knows that constructing a plausible reason to bomb the crap out of someone all depends on where you begin your narrative. If you keep starting your accusations at a point where the target has done something bad, all you have to do is repeat yourself over and over again to drown out any alternative backstory that surfaces.

And if you really want to demolish all contrary views, all you have to do is liken the targeted foreign leader to Adolph Hitler and keep repeating. That tactic was used with Saddam Hussein of Iraq and is now being employed against Vladimir Putin of Russia and it always works.

In the current context of Ukraine versus Russia the trick has been to tie everything to the invasion by Putin’s armed forces over four weeks ago, an undoubted act of aggression. Once you establish that as your launching point, preceding developments are rendered moot.

Who cares about U.S. promises not to expand the NATO alliance eastwards after the Soviet Union broke up in 1991? And there is also Washington’s role in regime change in Ukraine in 2014? Or even the relentless demonization of Russia linked to the 2016 U.S. presidential election followed by any unwillingness by Washington to negotiate even the most reasonable of Putin’s demands? Fuggedabout it!

And also forget about considering whether or not the U.S. has any national interest in going to war over Ukraine. Only Tucker Carlson and Tulsi Gabbard seem inclined to challenge the basic premise, which is to raise the question “Since Russia does not threaten us, why are we doing this? Do we really want a possible nuclear war over Ukraine?”

Just read The New York Times and you will learn that it is not about what’s good for America at all. It is all about a big bully country attacking a “democratic” neighbor with the U.S. and its brave allies standing up as the standard bearers of a Washington imposed “rules based international order.”

And now the U.S. is upping the ante by pushing ahead with its insistence that Russia is committing war crimes. But convincing the world on that point is a bit more difficult to accomplish. If one were to ask the question, “Which nation in the world commits the most war crimes?” the general international response might well be Israel or the United States.

Part of the problem would be working out an acceptable definition for a war crime while also developing a methodology for defining “the most.” If Israel attacks Syria four times in a week, is that four separate war crimes or only part of one continuous war crime?

As the United States has military bases in both Syria and Iraq that the respective governments have not authorized, and have in fact, asked the Americans to leave, is that a single war crime of illegal invasion and occupation or a continuous one punctuated only by the occasions when U.S. troops kill a few of the natives?

In any event it is difficult to “convict” Russia as neither Israel nor the U.S. has ever been held accountable for the war crimes they have committed, to include shooting and bombing civilians, hospitals, schools at random and occasionally wedding parties and other social gatherings.

President George W. Bush even started a couple of wars in places like Afghanistan and Iraq based on fabricated “intelligence” and the greatly beloved Barack Obama did the same to Libya and Syria. Both are now regarded as venerable elder statesmen even though they should be in prison and there is lately some talk among Democrats of seeing Obama or his wife run again in 2024 for the highest office in the land.

And is that Hillary waiting in the wings for a second try? Either way, it will be a bad day for anyone trying to establish a modus vivendi for working with Russia.

America’s blood lust vis-à-vis Russia is completely bipartisan, with the few sensible voices in Congress drowned out by the drumroll in high places accompanying the avalanche of propaganda pouring out of the mainstream media. It has long been axiomatic that the first victim of war propaganda is truth, but the United States only needs the stimulus of the possibility of war or conflict to begin its pattern of lying.

And, as the current situation illustrates, it is quite prepared to designate enemies that in reality do not threaten the country. It did so to bring about a greatly enlarged U.S. commitment in Vietnam and also through the Cold War by deliberate CIA overestimates of the power and reach of the Soviet Union.

Since 9/11 there has been a succession of presidents who have lied about nearly everything relating to national security and foreign policy, leading to invasions, assassinations, other types of interventions, and a “sanctions” prone government that has denied ordinary citizens of food and medicines while leaving the leadership of the targeted countries untouched.

One of the recent lies is a replay of the old “let’s get Saddam Hussein” playbook. Remember those savage Iraqi soldiers tearing Kuwaiti babies out of their incubators and throwing them onto the floor? Of course, it was all a lie concocted by the Kuwaiti ruling family and U.S. government largely neocon accomplices.

Now we are learning that the vile Russians bombed a maternity hospital! Except, of course, that it may have turned out to be completely untrue. And the media is now exclaiming that “Russia is putting the planet on the brink of World War 3!” while The New York Times is indicting political conservatives as purveyors of Russian propaganda.

Actually, it was the United States and NATO that have opened the door to a possible nuclear holocaust, but one hates to dispute what is an apparently a profitable and well-received story line.

But the best bit of lying has to be the ongoing propaganda war over twenty-six biological laboratories in Ukraine funded at least in part by the Pentagon. “Nothing to see here” says the Biden White House, while Russia is saying “Just a minute, folks…”

Meanwhile the plot thickens as emails have now surfaced indicating that Joe Biden’s son Hunter was involved in obtaining, and profited from, the U.S. government’s funding of the labs.

She then realized her error and both backtracked and elaborated that “uh, Ukraine has, uh, biological research facilities [and] we are now in fact quite concerned that Russian troops, Russian forces, may be seeking to, uh, gain control of [those labs], so we are working with the Ukrainiahhhns [sic] on how they can prevent any of those research materials from falling into the hands of Russian forces should they approach.”

The statement is absurd as the Russians undoubtedly already possess their own stocks of bioweapons. The existence of the labs themselves may be linked to the legacy of the break-up of the Soviet Union in 1991, when, by one account, the U.S. provided assistance through its “Cooperative Threat Reduction Program” to manage the existing bio and chem labs lest their toxic chemicals and pathogens fall into the wrong hands.

But the U.S. has actually done much more than that, Ron Unz observes how, “Over the decades America had spent over $100 billion dollars on ‘biodefense,’ the euphemistic term for biowarfare development, and [has] had the world’s oldest and largest such program, one of the few ever deployed in real life combat.”

Currently, the U.S. government claims blandly that the labs, which are run by America’s Department of Defense, remain active for “peaceful research and the development of vaccines.”

The U.S. Embassy in Kiev described the activity in greater detail as working “to consolidate and secure pathogens and toxins of security concern and to continue to ensure Ukraine can detect and report outbreaks caused by dangerous pathogens before they pose security or stability threats.”

Some Ukrainians have, however, been suspicious of their purpose, particularly as their activities are secret and are managed by the Pentagon rather than some civilian agency.

And if the original objective was to prevent the development of bioweapons, why is the U.S. still hanging around seventeen years later?

It was generally believed in the government that the agreement was focused on Ukrainian biosecurity, but all its related activities were and are classified and Ukrainian citizens were not even allowed to work together with the Americans.

There was some pushback on the labs, to include a cursory inspection in 2010-2012 and by 2013 the Ukrainian government sent an official letter demanding that the labs be closed. The 2014 regime change intervened however, and the decision was never implemented by the new regime.

It should be noted that if one is to protect against toxins and pathogens one must first create them in order to manipulate them or prevent them. If one thinks back to the notorious Anthrax scare in the United States in 2001, investigators determined that the lethal strain of the pathogen had actually been created in a U.S. Army biological weapons lab at Fort Detrick Maryland.

One might also consider COVID and the widely held belief that the Wuhan Institute of Virology had been manipulating various coronavirus strains to make them more contagious and lethal.

Nuland clearly admitted that there were U.S.-funded bioweapons in Ukraine when she expressed concern that Russia might occupy one of the labs and be tempted to acquire the material for its own use against Kiev.

And the Biden Administration, clearly embarrassed by the admission, has attempted to turn the tables by rejecting Russian suggestions that the labs might be seeking to design biological pathogens that target certain ethnic groups, which is why the existing labs have been placed all around the world, including Ukraine.

As far back as 2017, Russian President Vladimir Putin expressed his concerns about U.S. collection of biological material from ethnic Russians, as Unz puts it “certainly a very suspicious project for our government to have undertaken.”

If these Pentagon funded laboratories are indeed involved in propagating mutated strains of pathogens like anthrax and plague as biological weapons, like may have taken place at Wuhan, it would be a violation of Article I of the “UN Biological Weapons Convention,” making the United States government indisputably a War Criminal, with its leaders subject to the death sentence under the Nuremberg Laws which were in large part established by the United States Government itself in 1946.

That aside, the real concern right now should be that the U.S./NATO will stage some kind of false flag incident which will lead to calls for direct military intervention.

Watching Biden’s serial blunders and cover-ups suggests that there is nothing that Biden and Blinken will not do, up to and including starting some kind of hopefully manageable war to boost the president's sinking approval ratings.

Now that Joe Biden is talking tough, it is hard to imagine how he will get off of the horse that he is riding without stepping into some sort of armed conflict. As the former Reagan Administration official Paul Craig Roberts has astutely observed, “The evil that [now] resides in Washington is unprecedented in human history.”