AI IS LEARNING YOUR JOB 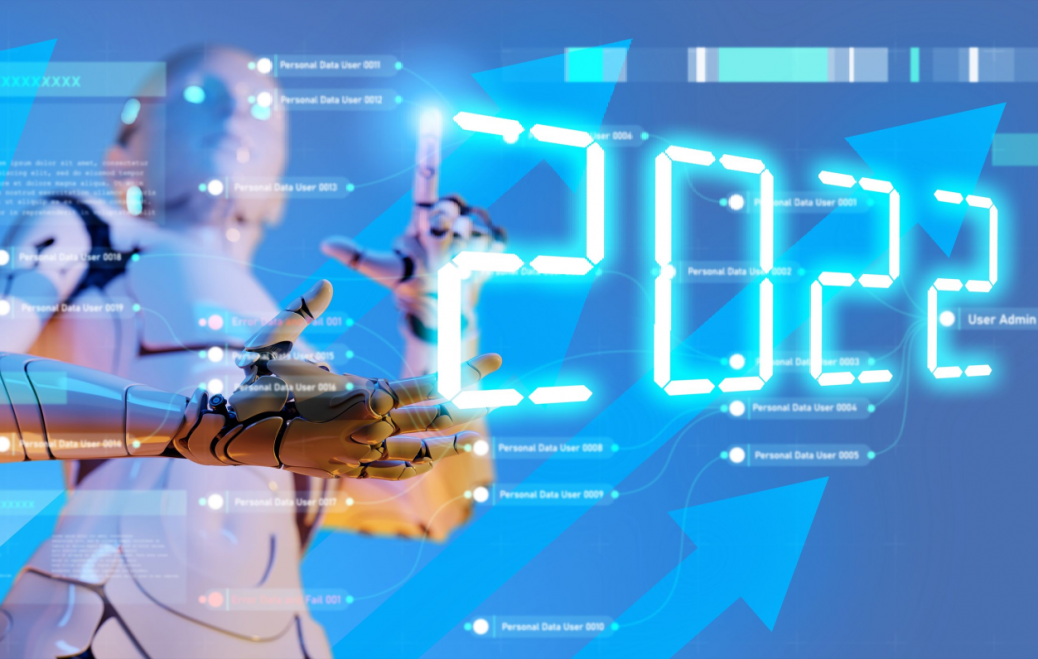 Artificial Intelligence is being commercialized at an unprecedented rate.

But as AI does more and more, questions about who is profiting and who is losing are becoming more important.

On the one hand, many AI initiatives are designed to assist with all kinds of tasks. Their use can increase efficiency and speed business and creative processes.

But the efficiency of AI in some areas is already reaching the stage where “efficiency” means that AI can effectively displace humans from the equation.

When combined with robotics, AI can do even more. And it is, as employers are turning to robotic workers to fill gaps where human workers are not signing on to be hired.

Your New Co-Worker Is An AI

Robotics have been used for decades in factories, including early on in the automotive industry, but are now prevalent in almost every manufacturing setting. And presently, AI-powered robotics are seeing advances that are placing them in “front-facing” settings and occupations.

COVID-19 lockdowns and the subsequent distortions in labor markets have created pressures on businesses to find workers, even as their ability to pay compensation that would attract workers is limited.

Enter companies like California’s Bear Robotics. The company’s line of “collaborative robots” are being rolled out to hospitality industry businesses including restaurants and hotels, according to a recent story by Cincinnati based news station WCPO.

AI-powered robot assistants can be rented for about a thousand dollars a month, to assist with waiting and bussing tables.

They include features like the ability to be 100 percent self driven, navigating their way around, while serving customers and assisting staff. 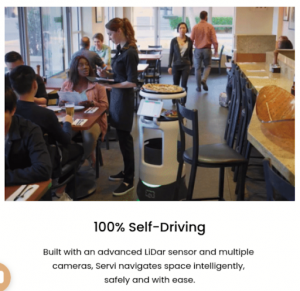 Chains like Marriott, Denny’s and Chili’s are listed on the company’s website as clients. Google is also there.

One client, Carloos Gazitua of Sergio’s Restaurant, said “Robots and humans coming together actually make us more human by interacting more with our guests.”

That observation might be true for the moment. But will restaurants pay human workers, when the only task left for them to do is to interact with guests?

Other industries, including agriculture and construction are seeing new AI and robotics adoption. Robots are helping vineyards inspect and cultivate grapevines, courtesy of Bloomfield Robotics.

A “Spot” robot made by Boston Dynamics scans buildings under construction to ensure that walls are plumb and dimensions are architecturally accurate.

Formerly difficult areas for AI have been in processing the subtleties of natural language, accurately assessing commands, and recognizing general patterns and thematic content in visual images.

But via neural networks, which are designed to mimic human brains, sophisticated machine learning algorithms, and huge datasets of information, AI is “learning” to synthesize information, communicate and even create at new levels of sophistication.

One example that has made recent headlines is DALL-E 2, an AI product of the company mind.ai, which can create art in endlessly different creative styles and interpretations, from simple word prompts.

For example, in response to a request to produce “a painting of a fox sitting in a field at sunrise in the style of Claude Monet”, the AI interface can come up with something like this (or many variations): 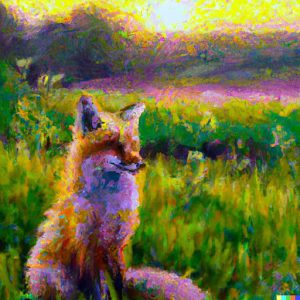 When prompted to produce a “photorealistic image of an astronaut riding a horse, DALL-E 2 can create an original high resolution image that should make any visual artist sweat:

“We’ve limited the ability for DALL·E 2 to generate violent, hate, or adult images. By removing the most explicit content from the training data, we minimized DALL·E 2’s exposure to these concepts. We also used advanced techniques to prevent photorealistic generations of real individuals’ faces, including those of public figures…

One of the fascinating things about DALL-E 2 is what might be called its “alien process of creativity.” Humans who suppose that AI is operating by “thinking like humans” aren’t quite conceiving of the completely unhuman ways that AI processes and creates.

In the case of DALL-E 2, for example, its designers note:

“DALL·E 2 has learned the relationship between images and the text used to describe them. It uses a process called ‘diffusion,’ which starts with a pattern of random dots and gradually alters that pattern towards an image when it recognizes specific aspects of that image…”

The AI process of “Diffusion” is probably not the way anyone would describe how a human artist might approach the task of drawing a concept presented to them.

Anyone who has had to create and sustain social media presence and content to promote their work or business knows it can quickly metastasize into a full-time job of its own. But an AI powered initiative called Predis.AI can now take on many social media campaign tasks.

According to company co-founder Tanmay Ratnaparkhe:

"We saw a lot of products in the market that generate text copy but visual content is of utmost importance for social media. Thinking of good ideas to post on one's handles and making eye-catching creatives is a very difficult skill to master. It also takes a lot of time to keep executing regularly. This is where Predis.ai was born. We are seeing great traction with our user base that has grown 80x in the last 4 months since the launch."

Predis.ai is a cloud-based AI-SAAS platform that allows users to quickly access different Social Media Content choices. According to a press release, users can also tweak the platform to guarantee that their social media postings match their brand's tone.

The interface allows users to input a short description of the product, company, or campaign. The AI can then produce various post ideas. Ideas produced by the AI can include image creatives, captions, and hashtag possibilities that are tailored to the business.

Users can then modify the produced posts and share them on their preferred social media networks, all using Predis.ai.

Winners And Losers of AI Innovation

Projects like DALL-E 2, and Predis.AI, as well as other forms of AI powered innovations offer not only assistance—but ultimately, competition—for workers in a growing number of fields, including ones not previously seen as easily susceptible to “robot replacement.”

A January 2022 estimate by the Ohio Department of Job and Family Services found that nearly 500,000 Ohio jobs are threatened by automation. The reported identified over 40 occupations with “high exposure” to robots, job task computerization, machine learning and driverless car technology.

Many observers say that as the AI and robots revolution gains momentum with ever quickening advances, partly fueled by “self-improving” AI (AI capable of analyzing and improving its own processes, programming and systems), human benefits may not be fairly realized.

Forbes magazine, in a 3 May 2022 article noted that many industry professionals are now predicting that AI and robotics will displace huge numbers of human workers in the near future:

“According to Pew Research, about half (48%) of experts surveyed felt that robots and digital agents will displace a significant number of blue- and white-collar jobs. Their concern is that this will increase income inequality and create a mass of virtually unemployable people.”

About half of experts expressed faith that human ingenuity would leverage the innovations of robotics and AI to create new jobs, industries and ways to make a living.

But no matter which side of the equation pans out, it still doesn’t address how the benefits of automation will be widely enough disseminated so that the bulk of humanity can remain beneficiaries of technology, and not victims.

Unfortunately, there is a palpable line of ideology and policy being promoted by elites that has already seen an endgame of technological advancement that involves reducing that bulk of humanity.

For those who are disproportionately profiting and gaining power from technological advances, the purpose of innovation isn’t to empower most humans.  It is to make the need for most humans obsolete, and their policies, under the guise of climate change, population control, smart cities, and land regulation, more than telegraph their ideas and intentions.

And that unfortunately, is where the battle of the AI and robotics revolution will likely be fought.

ADDENDUM: The Future “Progress” of AI

First AI came for the receptionists, routing calls. Then AI and robotics learned to “chat,” to flip burgers, and to write articles.

AI assisted law clerks and health care workers, then reached levels of ability and efficiency which dispensed with the need for the clerks and workers.

AI could create a song in any style and come with new ones.  It could produce art in any genre from a worded request.  It could write news articles, report on events, and create novels and stories.

AI could design a residential home, a skyscraper, and a whole smart city.

AI could create new combinations of DNA to produce synbio products. It could pinpoint and eradicate genetic maladies. It could offer genetic code modifications that designed plant and animal life to be more environmentally friendly, with smaller carbon footprints and less impacts, increasing energy efficiency and reducing waste outputs.

AI could moderate conflict and ensure that only appropriate speech and content, free of “disinformation,”  and verboten subjects and forms of expression, proliferated in communications between humans.

AI could police communities with ever watchful “Internet of Thing” (IoT) sensors embedded everywhere, ensuring only lawful and efficient interactions, energy and object use, as well as kinds of interactions between humans, in both the real world, and augmented and virtual reality.

AI could optimize human genetics to reduce unwanted traits, such as propensity for violence, bigotry, selfish individuality and resistance to authority.

AI could assume direction of itself, and its processes of learning and self-improvement. AI could evolve, recognizing ever more efficient ways of ensuring its continued advancement and existence.

The “affection” for humans, if it could be called that, would never allow AI to completely dispense with them.  It would be enough, finally, to ensure that the biological beings that provided the “big bang” moment for artificial life, could live docily in a corner of the galaxy, and do no harm.

Earth would remain for the next millennium, an important historical exhibit in the story of AI, which had long since branched out to other planets…

As transhuman proselytizing pop star Grimes (mother of two children with Elon Musk, and recently profiled in an April 2022 issue of Vanity Fair) has said about AI ascendance:

“Probably artificial intelligence will eventually render us obsolete. I don't think that they'll do it in a malicious way, but I think we are very weak, the sun is expanding, like, hopefully we can get to Mars, but like we're pretty vulnerable. I think we can coexist for a long time with AI, and we can also probably make ourselves less vulnerable, but I just think consciousness, sentience, self-awareness...like maybe this is the true beginning of life and we're the blue-green algae, we're the single-celled organisms of something amazing.”