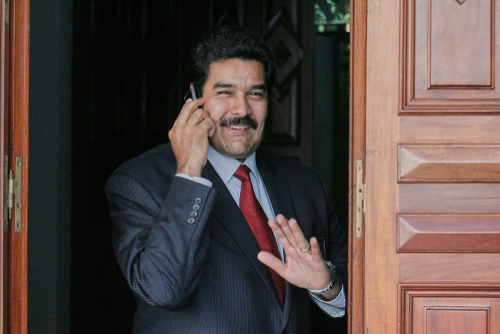 It’s all about the oil, stupid.

After years of trying to unseat Venezuelan President Nicolás Maduro in favor of Juan Guaidó—a nothing of a U.S. puppet pumped up by Donald Trump during his presidency—the U.S. wants to make friends with Maduro after it banned Russian oil imports and sent oil prices soaring. (See “As forecast: U.S. leads coup in Venezuela,” 31 Jan 2019 and “Regime Change in Venezuela: Made in U.S.A.” 15 May 2019)

Maduro’s government last Tuesday released two Americans who were imprisoned in the country, which was seen as a major thaw between Washington and Caracas, despite U.S. officials saying the release had nothing to do with potential oil sales to the U.S, according to The New York Times.

The paper reported that there have been “back-channel discussions” about resuming the oil trade with the U.S.

Gas prices in the U.S. had been approaching record levels last month—prior to the Ukraine War. Russia normally ships about 90,000 barrels of crude oil per day to the U.S. Washington hopes that Venezuela could make up for the missing Russian barrels.

Jake Sullivan, the White House national security adviser, told NBC's “Meet the Press” on Sunday that the U.S. would only lift sanctions on Venezuela if it is tied to “concrete steps” from Maduro’s administration.

Sen. Bob Menendez, the chair of the Senate Foreign Relations Committee, expressed concerns that purchasing oil from Maduro would lead to a more destabilized region and impact an entire generation.

"Nicolás Maduro is a cancer to our hemisphere and we should not breathe new life into his reign of torture and murder. As such, I would strongly oppose any action that fills the pockets of regime oligarchs with oil profits while Maduro continues to deprive Venezuelans of basic human rights, freedoms, and even food," Menendez said, according to The Hill.

The Trends Journal has long reported on the U.S. effort to prop up Guaidó and recognize him as the country’s true leader. (See “VENEZUELA: GUAIDÓ BLOCKED, GUAIDÓ BACK” and “EUROPEAN UNION SNUBS GUAIDÓ.”)

President Trump once declared, “Maduro is no longer president of Venezuela. Trump’s administration launched the propaganda campaign branding Maduro’s victory as “heavily rigged,” “fraudulent,” “a sham,” “a joke” and “a disgrace.”

Trump’s White House ended oil shipments from Venezuela and his team tried to inspire a coup.

But, in fact, the elections in Venezuela were regarded as among those closely monitored and legitimate. Several international monitoring organizations observed the elections and affirmed their fairness.

But a lot can be forgiven when it comes to oil prices.

Officials from Washington joined Maduro in his palace over the weekend, which The Washington Post pointed out was the highest-level U.S. contact with the country in years. Guaidó, the opposition leader, was nowhere to be found.

The paper, citing four U.S. officials, said the officials were in touch with Guaidó during the visit, but they did not meet face to face. The hope of the meeting was to “drive a wedge between Caracas and Moscow, the Post reported.

Besides oil prices, the Biden administration is concerned that Venezuela could become a security risk as the war with Russia and Ukraine drags on. There is fear that Moscow could deepen military ties with Caracas.

The paper wrote that the meeting “strengthened Maduro at a time when Guaidó and his allies, still recognized by the United States as Venezuela’s interim government, struggle to remain relevant.” The Wall Street Journal reported that Maduro gave a speech and bragged about the meeting.

“The loser in all of these actions by the United States is the opposition, but especially the interim government,” an opposition figure told the Post.

Guaidó, the opposition leader, said Wednesday that only a democratic nation could be “a reliable and efficient energy supplier for the world.”

Biden said Guaidó was aware of the meeting with Maduro, and his administration continues to recognize him as the legitimate president, El País reported.

Brian Winter, vice president of the Council of the Americas, told the AP that clearly a “decision was made to abandon some of the pillars of the U.S. policy toward Venezuela these past few years.”

“But until we know precisely what the Biden administration is trying to achieve, it’ll be difficult to evaluate how far this détente can go,” he said.

TRENDSPOST: The U.S.’s overture to Venezuelan President Nicolás Maduro, who Washington denounced as its illegitimate leader is further proof that Oil Talks and Bull Shit Walks. The Biden administration has reached out to Venezuela, Iran, and Saudi Arabia after its fallout with Moscow.

Helima Croft, the head of global commodity strategy at RBC Capital Markets, told The Wall Street Journal that the Biden administration’s effort is akin to “a scavenger hunt.”

“Given the potential magnitude of the Russian losses, the White House will need something akin to a straight flush to pull it off,” she said.

Rep. Gregory Meeks, chairman of the House Foreign Affairs Committee, said in a statement Wednesday that the “Trump-era oil sanctions currently in place have only deepened the suffering of the Venezuelan people and failed to weaken Maduro’s control of the country.”

“In addition to the Trump administration putting a $15 million bounty on President Maduro and accusing him of being a narco-terrorist, as recently as 1 April, President Trump announced that U.S. Navy ships were ordered to the coast of Venezuela to prevent drugs from leaving the country bound for the U.S.

“Again ignoring the economic terrorist sanctions imposed by Washington, Secretary of Defense Mark Esper stated at that time, “The Venezuelan people continue to suffer tremendously due to Maduro and his criminal control over the country, and drug traffickers are seizing on this lawlessness.”

TRENDPOST: What applied back then, when Donald Trump attempted to overthrow the Venezuelan government, applies now with the media coverage of the Ukraine War and the United States arrogant hypocrisy.

“Absent from all of the media coverage and analysis by their ‘experts,’ is the fact that the United States has absolutely no moral or legal right to intervene and dictate how other countries choose their leaders.

“Yet, this is the same America that condemns other nations for the same actions that it takes. For example, the U.S. and its media have continually condemned Russia for its involvement in Ukraine, a neighboring country. And both Iran and Russia are chastised for their involvement in Syria, even though they were invited to intervene by the nation's president.

“And this is the same America that is overtly "meddling" in Venezuela's elections, while condemning Russia non-stop for allegedly meddling into its 2016 elections.”

TRENDPOST: Before Trump’s Crusade to overthrow the Maduro government, in 2015, the Obama administration officially declared Venezuela to be an “unusual and extraordinary threat” to national security, officially declaring: “We are committed to advancing respect for human rights, safeguarding democratic institutions, and protecting the U.S. financial system from the illicit financial flows from public corruption in Venezuela.”