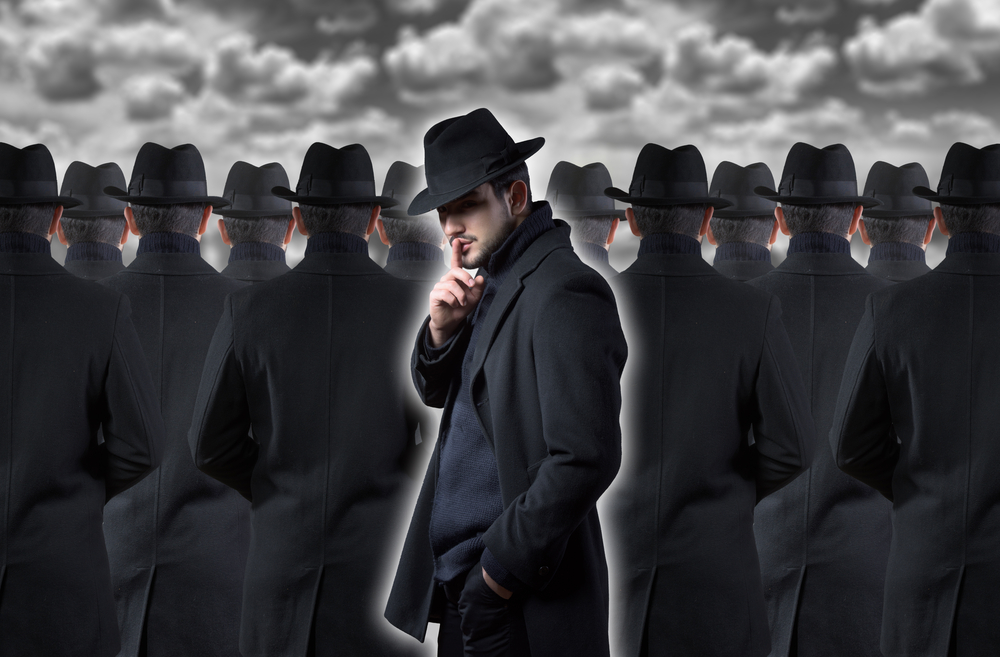 Most conspiracies aren’t what they’re cracked up to be.

They’re not very well hidden. They’re usually the overall simplest explanation for what occurred. Even the propaganda efforts pressuring people to discount their own common sense and cognizance of facts don’t really qualify as conspiratorial.

John McAfee didn’t kill himself. He told us himself in a 2019 tweet, and tattooed it on his arm:

“Getting subtle messages from U.S. officials saying, in effect: "We’re coming for you McAfee! We’re going to kill yourself”. I got a tattoo today just in case. If I suicide myself, I didn’t. I was whackd. Check my right arm.”

McAfee also explained that there’s nothing hidden or “conspiratorial” about the deep state. It’s right there, spying on us, and co-opting the powers and undercutting the mandates of our elected representatives.

So, with a nod to McAfee, following is a non-exhaustive perusal of some of the more consequential non-conspiracies of the 21st Century…

COVID-19 was man-made. It was the obvious explanation from the first, and people knew it. MSM rebuttal headlines like “No, the coronavirus wasn’t made in a lab. A genetic analysis shows it’s from nature” were already making the rounds in March of 2020.

THE COVID WAR, from the virus itself to the implemented “solutions”, was a human-created disaster. People know who gained and lost from it. The Chinese and the technocratic elites of the West have been the winners and perpetrators, while the rest of the world lost.

People know wearing masks was never scientific. Neither was social distancing, nor using mad amounts of hand sanitizers. They know lockdowns of “non-essential” local businesses and churches and people, while keeping box chain stories and fast food restaurant chains open, was arbitrary to the point of absurd.

People understand the vaccines are about money, and a test of authoritarian control. They know cheap, safe drugs like Ivermectin and Hydroxychloroquine should have been allowed to be prescribed by doctors, even if efficacy was not proved. For virtually all of 2020, the experimental vaccines weren’t even available.

People know COVID “death rates” and “case rates” have been highly manipulated. In the words of Joe Rogan, people claiming otherwise are “saying things they know aren’t true. And yet they’ll fight for them. There’s a weirdness to that.”

China is thoroughly embedded in American institutions. It wields power over businesses, and has co-opted our politics.

In 2020, vice dean of Renmin University's School of International Relations Di Dongsheng infamously boasted that the CCP had people “at the top of America's core inner circle of power and influence.” He added “we have been utilizing the core power of the United States for the past 30 years, 40 years.”

China’s infiltration is in the open, on college campuses and schools across the country, in virtually any large business, in entertainment and sports, and, most perniciously, in government. Comprising scandals of China influence involving now President Joe Biden and son Hunter, Senator Diane Feinstein (D-CA), Representative Eric Stalwell (D-FL) and other politicians are not hidden.

China steals hundreds of billions from the U.S. alone in intellectual property, including much cutting-edge technology. They have intercepted data on thousands of American citizens, and have used that information to influence and corrupt decision makers.

Regulatory changes that allowed Obama administration officials to profit off insider deals with China were chronicled in detail in “Secret Empire”, a 2018 book by Breitbart editor Peter Schweizer. A Fox Business story at time summarized:

“Former President Barack Obama used his executive powers to impose industry regulations that lowered the value of certain companies and led to financial gains for a firm owned by two close family friends, according to Breitbart editor-at-large Peter Schweizer.

“The admissions were revealed in Schweizer’s new book, “Secret Empire,” which found a pattern of investments in coal, offshore mining and for-profit universities that closely tracked the Obama administration’s regulatory policy changes. Billionaire activists Tom Steyer and George Soros were among the beneficiaries.”

Arguably the most significant Chinese “achievements” to date have been mortally wounding the West with a man-made virus, and ousting a President who took the most economic and cultural stance against them in more than 40 years.

Many Trends Journal articles have highlighted aspects of China’s efforts, including:

“HIGHEST LEVEL EVER CHINESE DEFECTOR HAS INFO ON WUHAN LAB AND MUCH MORE,” 22 June 2021

CNN recently reported on the need for the Federal government and FBI to work more closely with the private sector, in the name of combating “Cyber Crime”:

“Cybercrime is on the rise throughout the United States, but many of those attacks are not being reported to the authorities, suggests a new report released Sunday by the FBI and the Computer Security Institute (CSI)...

“Now, more than ever, the government and private sector need to work together to share information and be more cognitive of information security so that our nation's critical infrastructures are protected from cyberterrorists.”

The government has long used “cybersecurity” and “protecting infrastructure” to surveil the American populace. It was there in the Patriot Act, just 45 days after 9/11. As the ACLU has noted:

“Hastily passed 45 days after 9/11 in the name of national security, the Patriot Act was the first of many changes to surveillance laws that made it easier for the government to spy on ordinary Americans by expanding the authority to monitor phone and email communications, collect bank and credit reporting records, and track the activity of innocent Americans on the Internet. While most Americans think it was created to catch terrorists, the Patriot Act actually turns regular citizens into suspects.”

In 2013, Eric Snowden confirmed the comprehensive nature and granular details on how it was being accomplished. But the broad outlines were not hidden. Not at all.

The Political Weaponization of Domestic Intelligence

This of course often works in conjunction with the surveillance state. The American political system has been subverted by and via U.S. intelligence agencies.

Intelligence agencies with actors directly connected to the Obama-Biden administration and the 2016 Hillary Clinton campaign hobbled the Trump presidency with spying and knowingly false allegations of “Russian collusion”.

The spying, from the summer of 2015 on, was never much of a secret, though Trump and the media warred over the details. By 2020 even NPR was reporting on the undeniable abuses. USA Today featured a piece by James Bovard about the sorry state of U.S. domestic intelligence abuses:

“FBI machinations at the FISA court are especially perilous to American democracy because that court is extremely docile to federal agencies. The FISA court ‘created a secret body of law giving the National Security Agency the power to amass vast collections of data on Americans,’ The New York Times reported in 2013 after Edward Snowden leaked court decisions. FISA decisions have ‘quietly become almost a parallel Supreme Court...regularly assessing broad constitutional questions and establishing important judicial precedents, with almost no public scrutiny.’ The court’s servility can boggle the imagination, such as its rubber-stamping FBI requests that bizarrely claimed that the telephone records of all Americans were ‘relevant’ to a terrorism investigation under the Patriot Act, thereby enabling N.S.A. data seizures later denounced by a federal judge as ‘almost Orwellian.’

“Ironically, the FISA court was created in 1978 to prevent Nixon-style political spying…”

Financial elites play by special rules, colluding with government to pass off losses, and siphon savings (ie. the fruits of labor) from average Americans. They prey on businesses and whole industries, without regard for country or any greater good. It’s not a problem of left vs. right. Occupy Wall Street in 2011, and the 2016 election, with the insurgent campaigns of Bernie Sanders and Donald Trump, were both reactions to it.

In 2007, the only real financial “crisis” was that big banks lost their corrupt leveraged investment and lending casino bets, then demanded the government save them, because doing otherwise would mean a world catastrophe.

“Just as the Twin Towers collapsed, from the top down, so too will the US economy from an Economic 9/11. When the high-stakes speculators, banks, brokerages, and buyout firms that leveraged billions with millions get hit … everything underneath them will turn to rubble.

“The subprime problem was peanuts compared to the hefty bets made on commercial real estate deals, leverage buyouts, credit spreads, complex mortgage securities, and other esoteric investments that were fabricated with hardly any money down. When the giant firms fall, they’ll crush the man on the street.”

The culprits were right there, stealing their billions in broad daylight, saddling the public with their losses, and receiving capital infusions instead of jail sentences.

A recent viral podcast featuring Tim Poole with guest Steve Bannon presents a lot of useful perspective on events still playing out from the capitulation to a debt-driven economy rigged to hollow out the working classes.

THE COVID WAR, along with its other “accomplishments”, has served as a ready new catastrophe to transfer even more wealth. Meanwhile the masses have again been mollified by reams of stimulus. According to CEIC, an economic analytics firm, United States Total Debt accounted for 895.4 % of the country's GDP in 2020. That represented an all-time high.

This was the one that started the century off on a footing from which America has never really recovered. Of course, conspiracy theories have famously surrounded the event. But many things concerning 9/11 can’t be argued:

As far as U.S. officials having specific intel on an imminent attack, the official 9/11 Commission Report only determined that there was “vague chatter” surrounding a possible attack.

But people know that a door was left open to the attack. A 2015 documentary The Spymasters, which aired on Showtime in 2015, revealed that the government had much more specific information than the 911 Commission Report allowed.

But was that really surprising? No. The “vague chatter” always sounded like CYA. The revelations of a documentary, dropped in at a safe distance of time, merely confirmed it.

In the documentary, CIA director George Tenet and his chief counter-terror aide, Cofer Black recount receiving information in July of 2001 that was quite a bit more than “vague chatter”.

According to Black, the head of the agency’s Al Qaeda unit, Richard Blee, informed his superiors that “‘Chief, this is it. Roof’s fallen in.’ The information that we had compiled was absolutely compelling. It was multiple-sourced. And it was sort of the last straw.”

Black and Tenet agreed that an urgent meeting at the White House was needed. Tenet said in The Spymasters that he picked up the white phone to Condoleezza Rice, President George W. Bush’s National Security Adviser:

Tenet recalled the ensuing meeting with Rice at the White House.

“Rich [Blee] started by saying, ‘There will be significant terrorist attacks against the United States in the coming weeks or months. The attacks will be spectacular. They may be multiple. Al Qaeda’s intention is the destruction of the United States.’”

9/11 set the stage for a new generation of wars and war spending, and much more. The American populace has never been more surveilled and less free than it is as a result of the Patriot Act and many other changes and abuses of U.S. intelligence agencies.

People know that in one way or another, 9/11 didn’t have to happen at all. And that’s not a conspiracy theory.