A PLUS AND A MINUS FOR VAX MANDATE EXEMPTION 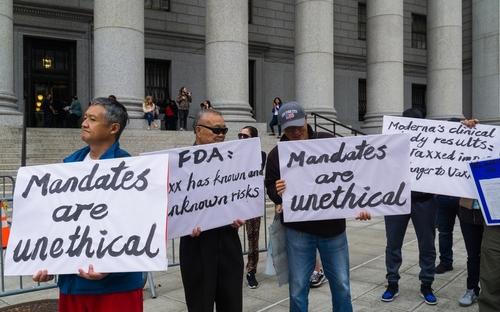 The Wall Street Journal reported, on 13 October, two separate judicial rulings handed down the previous day, each one regarding COVID-19 vaccine mandates, but with quite different results.

In the first, hospital and nursing home workers in New York State had been under a state directive, issued in August, to be vaccinated within 30 days. That directive had provisions for medical exemptions, but none for religious exemptions, and the workers who refused vaccination on religious grounds lost their jobs.

The workers claimed that their federally protected rights to seek religious accommodation from their employers had been violated, and a 14 September restraining order on the state directive supported that. The ruling on 13 October extended that restraining order, and makes the workers' challenge of the mandate likely to ultimately succeed.

New York's Governor Kathy Hochul (the lieutenant governor under Andrew "The Nursing Home Killer" Cuomo, she succeeded him upon his resignation) vowed, however, to fight the ruling, asserting that requiring healthcare workers to be vaxxed falls under her responsibility to protect the people of her state.

In the other ruling, ten New York City educational workers had sued the city's Department of Education and Mayor Bill de Blasio in an effort to block the city's vax mandate, which they claimed violated their constitutional rights and was unlikely to quell the spread of COVID-19. But a federal judge in Manhattan decreed that the mandate was lawful, making the lawsuit unlikely to succeed.

TREND FORECAST:  We predict that, as noted in "HOSPITALS' JAB-WARY WORKERS: VAXX MANDATES" (27 Jul 2021), Americans like those who Samuel Adams called "an irate, tireless minority, keen on setting brushfires of freedom in the minds of men," will continue to resist compulsory vaccination using whatever legal avenues they think might succeed.

As evidenced by the tens of thousands of Italians who took to the streets these past few days in protest of being forced to take the COVID Jab or not go to work, the anti-vax, anti-establishment trend we had long forecast, will spread globally.