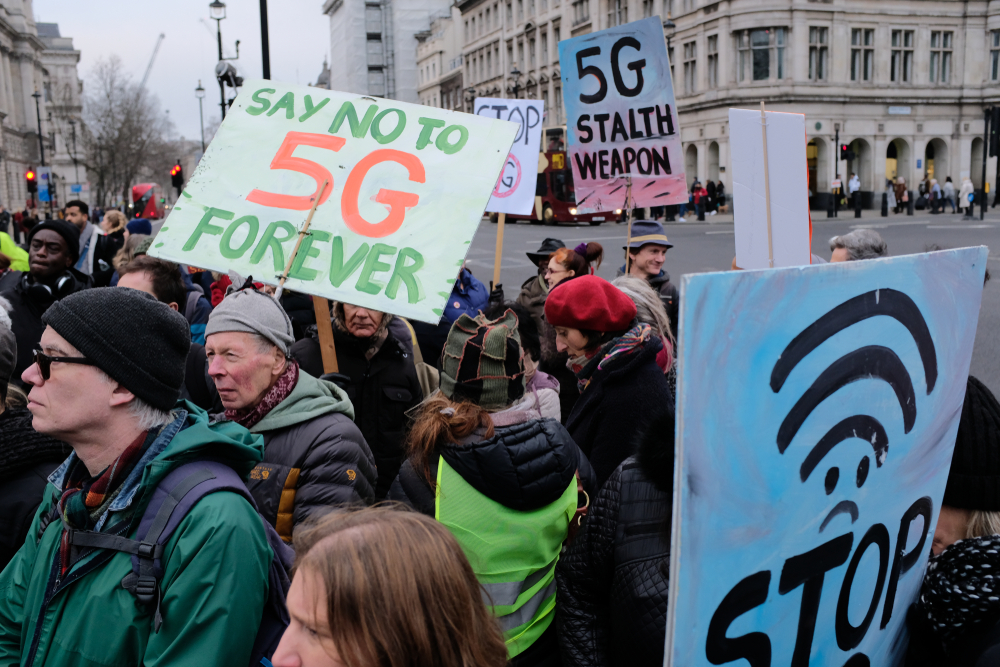 The roll out of the new C-Band 5G service by AT&T and Verizon scheduled for January 19, has raised alarms for major airline executives who have warned that it will create “catastrophic” interference with flight navigation systems and pilot safety during take off and landing.

The risks will be greater during bad weather.

Among the warnings are major disruptions in commerce and supply chain, the overriding of aircrafts’ electronic safety systems and radio altimeters, and the grounding of flights that will leave “tens of thousands of Americans grounded.” According to CNN, the airlines estimate that upwards to 1,000 flights will be disrupted daily.

The 5G threat is particularly heightened in low-visibility conditions.

Chief executives from American Airlines, United, Delta, Southwest and JetBlue have demanded that 5G be blocked within a two-mile radius of major US airports. FedEx and UPS have also joined the airlines’ complaints.

Foreign airlines such as Dubai’s Emirates, Air India, Japan Air, Lufthansa and British Airways have already changed or canceled flights to the US. Two of the world’s largest plane manufacturers, Airbus and Boeing, have also issued warnings.

This has become an ongoing battle between the Federal Aviation Administration and the private telecom industry and its Washington lobbyists. The FAA has been warning about 5G interruption of planes’ navigation systems for quite some time.

The telecom industry’s unwillingness to budge is most disturbing because the Biden administration has already permitted 90 percent of wireless tower deployment to roll out as scheduled.

It is only in the vicinity of major airports where the FAA and airlines demand restrictions due to safety concerns. However, as we have reported for the past several years, the telecomm giants, notably AT&T and Verizon, and its leading media spokespersons at CNN and the New York Times, have undermined and denied 5G’s risks, especially to human health and the environment, ever since wireless technologies were first commercialized.

5G is destined to be a permanent fixture across the nation. There is barely a chance to prevent it. The thousands of medical and environmental studies confirming high EMF’s dangers and the petitions signed by thousands of international scientists to halt its deployment are unequivocally ignored or worse ostracized and canceled.

It is estimated that there are over 10,000 peer-reviewed clinical studies mentioning serious molecular biological injury and defects to organs, neurons, cells and cellular function, and DNA damage to plants, animals and humans alike.

Between August 2016 and September 2018 alone, over 400 new studies on electromagnetic radiation risks were compiled by public health Professor Joel Moskowitz at the University of California at Berkeley.

Despite the pandemic, lockdowns and social distancing have not hindered 5G’s progress to connect every American into its spider’s web.  In December 2019, T-Mobile reached its goal of nationwide 5G coverage of over 1.3 million square miles (34 percent of the US) and AT&T reached its milestone to reach 179 million people.

The 5G roll out is also crucial for international globalists to usher in the Fourth Industrial Revolution.

We must not hold any false hopes that the Biden administration will ultimately side with the airlines’ safety concerns. During the 2020 election, the Biden campaign received $97 million from the Communications/Tech sector versus Trump’s $18 million.  Alphabet (Google), Microsoft, Amazon, Facebook, Apple, AT&T and Comcast overwhelmingly contributed to Biden’s war chest.

The American public is being bamboozled with blatant falsehoods to embrace 5G as a necessary and innovative technology that will benefit and improve our lives. But the real truth is the exact opposite.

The following information has been abbreviated from scientific literature that is fully validated and has been stated by international experts such as Drs. Devra Davis and Martin Pall about EMF's adverse effects to government leaders and national legislators repeatedly.

This outline was presented by Dr. Martin Pall, a Professor Emeritus of Biochemistry and Medical Sciences at Washington State University to the National Institutes of Health. Dr. Pall is recognized worldwide as an expert in EMF and 5G's detrimental effects on biological systems and the diseases associated with wireless technologies.

There are also other medical conditions that have been shown to be associated likely with EMF exposure:

Everyone will be affected by 5G’s radiation. But it will not require three decades to observe its injurious effects.

Unlike cigarettes, nobody has a choice whether you wish to be exposed to 5G or not. 5G’s EMF radiation is all-pervasive.

The mainstream media, in particular the New York Times, which has a collaborative agreement with the leading 5G provider Verizon, have no intention to warn the public about any of the scientific findings mentioned above.

There is a growing consensus in the scientific and medical community that 5G will usher an epidemic of disease never before witnessed in human history. It is too difficult to make forecasts.

Nevertheless, if the past and current research on EMF's adverse effects on health and the environment during the past 50 years are any indication, we are entering a new epoch of disease and neurological disorders that humanity is completely unprepared to handle.

This is a consequence of what happens when an entire nation is trapped into carelessly trusting elected presidents and legislators whose campaigns are bankrolled by the Telecomm giants and Silicon Valley, and a media empire ruled by serial liars and masters of disinformation campaigns for private corporate interests.

This is vulture capitalism at its worst.